2018: The Weakest Year in the Presidential Election Cycle Has Begun

You are probably aware of the influence US elections have on the stock market. After Donald Trump was elected president, a particularly strong rally in stock prices ensued.

Contrary to what many market participants seem to believe, trends in the stock market depend only to a negligible extent on whether a Republican or a Democrat becomes president. The market was e.g. just as strong under Democratic president Bill Clinton as it was under Republican president Ronald Reagan.

From a statistical perspective, the decisive factor for the market trend is not the party allegiance of the president, but rather the year of the presidency. In this context we speak of the presidential election cycle, which has a duration of four years.

The following chart depicts this election cycle, i.e., the average four-year pattern of the Dow Jones Industrial Average over more than a century. On the left hand side you see the pattern during the election year, followed by the first post-election year. Thereafter comes the mid-term pattern – which is highlighted by a red circle – and lastly the pre-election year pattern.

The mid-term year is the weakest period of the cycle. Source: Seasonax

In the past 116 years the DJIA on average delivered the strongest performance during election and pre-election years. Post-election years typically also managed to generate gains. The mid-terms were typically the weakest period.

2018 is a mid-term year. Should we expect weakness in the stock market? Let us take a closer look at the mid-term pattern of the market.

The typical mid-term year under the magnifying glass

The next chart shows the typical pattern in the Dow Jones Industrial Average during mid-term years. In short, it isa close-up of the time period circled in red in the first chart. 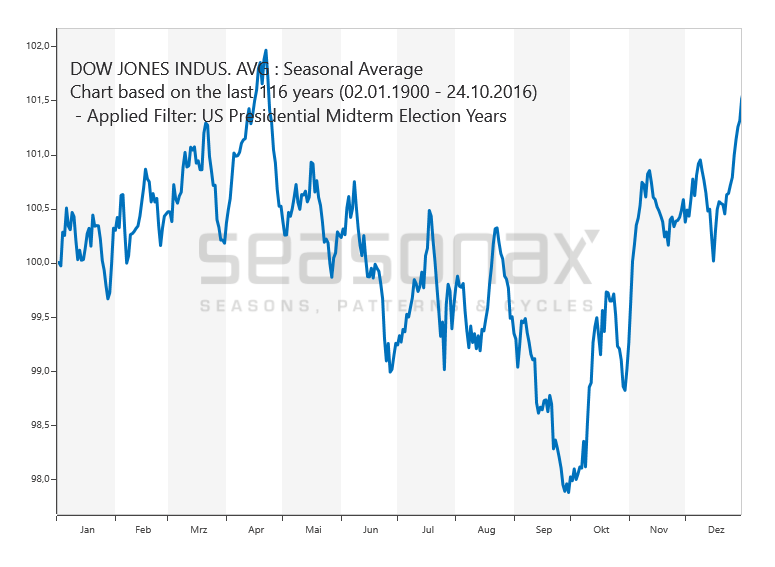 A significant decline tends to begin in April. Source: Seasonax

The average mid-term year starts out with a mild advance, followed by weakness after a peak in mid April. In the final quarter of the year the market rallies again.

Overall, the market on average barely manages to gain ground. What does this mean for 2018?

If the market moves sideways on average, it implies that prices fell in some years and rose in others.

In the long run stock prices tend to rise though, due to economic growth and particularly due to the continual debasement of money – just as happens in the other three years of the election cycle.

Given that prices on average barely rise in mid-term years, there is obviously a heightened probability of declines. Thus there is a threat of a sizable fall in stock prices in 2018!

And what about other markets, such as the gold market or the foreign exchange markets?

Examine the effects of the election cycle on other markets as well!

Something you may not be aware of is that the election cycle affects other markets as well. This is something one can definitely take advantage of as a trader, investor or broker. In order to do so, visit my free-of-charge web site www.seasonalcharts.com or call up the Seasonax app on a Bloomberg or Thomson Reuters system. Nothing is ever guaranteed in the markets, but you should let the probabilities work in your favor!