Federal Reserve: How stocks and currencies actually move around the FOMC meeting

Eight times every year, the Federal Open Market Committee (FOMC) of the Federal Reserve holds its regular monetary policy meeting. Market participants are awaiting the outcome of this meeting with bated breath, as it determines the monetary policy of the most influential central bank: will it cut interest rates or hike them? These decisions can set the course for the world's largest economy.

However, while most investors and analysts are focusing on the outcome of the FOMC meeting, from a statistical perspective it is actually the time leading up to the meeting that is of importance for investors.

But how exactly does the FOMC meeting impact the markets? In order to answer this question we will first examine its effect on the S&P 500 Index. To this end we take a look at the typical pattern of share prices before and after the second day of the Fed meeting, when the committee's decisions are announced.

Thus it can be seen at a glance on the seasonal chart what the pattern of US stock prices typically looks like in the days surrounding the Fed's monetary policy meeting. 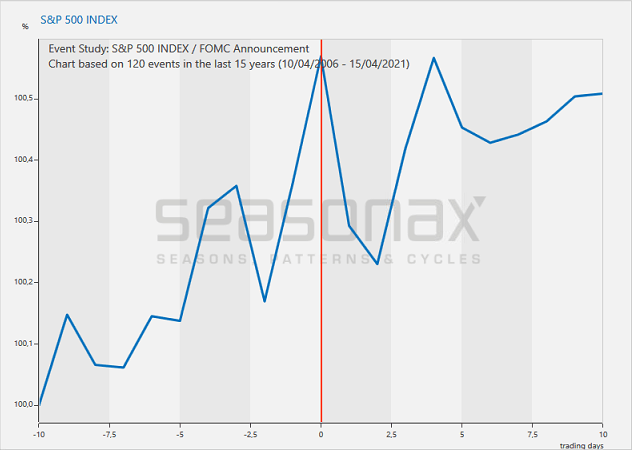 In the two days leading up to the meeting, the S&P tends to rise particularly strongly.
Source: Seasonax

As the chart reveals, share prices are already rising well before the outcome of the Fed meeting is announced. The average increase over seven trading days was 0.51 percent, with the bulk of the advance taking place in the last two days before the announcement.

However, in the days after the FOMC meeting, prices begin to move sideways - the high expectations of investors were not justified, at least in relation to the post-announcement trend!

Possibly you have already heard about the typical pattern of stock prices around FOMC meetings via an award-winning study by David O. Lucca and Emanuel Moench, at the time economists with the New York Fed.

However, it is not as widely known whether other major markets also exhibit typical patterns around Fed meetings. What is the relationship between FOMC meetings and prices in these other markets?

EUR-USD is the most important currency pair. Take a look at the next chart in this context. It depicts the typical price moves of the euro against the US dollar around the Fed meeting. This time I have chosen a time span of 15 days before and 15 days after the FOMC meeting for a suitable illustration of the pattern associated with the EUR-USD pair. 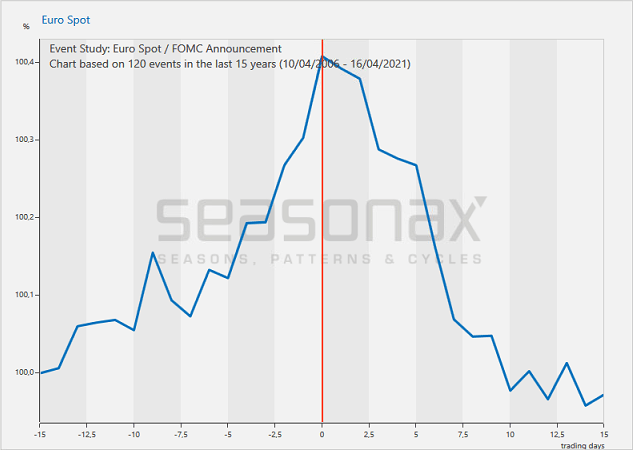 The euro appreciates ahead of the meeting and declines thereafter!
Source: Seasonax

It can be discerned quite clearly how pronounced the pattern of EUR-USD around the Fed meeting is – in the run-up to the meeting, the euro appreciates significantly. Particularly on the tenth day and then starting from the seventh day before the meeting a steep ascent is evident.

Thereafter a decline sets in that is just as swift. By the tenth trading day after FOMC meeting the euro has relinquished its entire gain against the US dollar again.

There are thousands of unknown patterns

As you can see, there are regular occurrences in the markets waiting to be discovered. Apart from events such as the Fed meeting, seasonality in particular provides countless recurring patterns for all kinds of different markets. From stocks to indexes, commodities, currencies and even bonds, every market has something to offer. You are most welcome to have a look for yourself!

PS: The FOMC meeting provides a tailwind to stocks and currencies in advance!