Jewellery Season: Golden Days Ahead for this Precious Metal

The price of gold typically increases in the second half of the year. This pattern is so striking that even a large number of market observers are aware of it. However, using Seasonax allows us to investigate this more closely.

Take a look at the seasonal gold chart, which shows the average prices over twenty years. 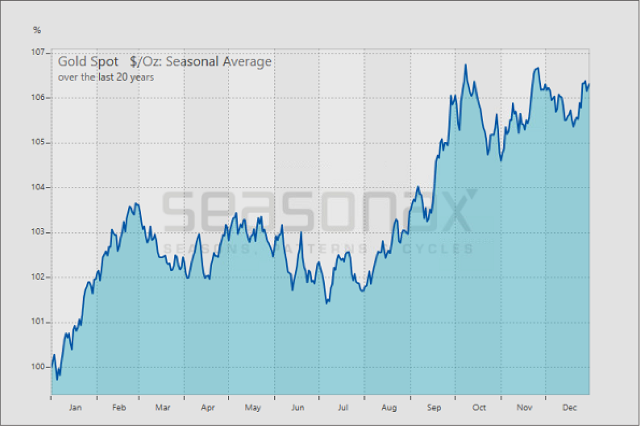 As you can see, gold falls seasonally from the end of February until well into July, while increases take place between July and the beginning of October and then, particularly, in January and February.

A good reason increases the chance of growth

The reason behind this seasonally positive phase for gold in the second half of the year until the beginning of the following year is partly the season itself. Gold is, of course, not just an industrial and investment metal – it is used too to produce jewellery. Some holidays and celebrations, such as Christmas, influence the seasonal consumption of gold jewellery and, consequently, the price of gold. Jewellery sellers buy in advance, often months beforehand, which is why gold’s seasonally positive period from July onwards is very stable and the prospects of increasing gold prices are good. However, gold isn’t the only commodity to display a seasonal development – other raw materials as well as currencies, bonds, and stock and shares do too.