May Is Over: So How Risky Is Still Having Stocks Now?

I’m sure you all know the adage: ‘Sell in May and go away!’ It’s probably the most famous seasonal stock market adage, and likely even one of the oldest known stock market sayings out there.
The graph below shows us what following this rule since 1960 would have resulted in. Returns that would have been generated by a Dow Jones investment between November and April are represented as a percentage by the blue line; returns on investment during the summer months are represented by the red line.

Dow Jones, during the summer (blue) and winter (red) 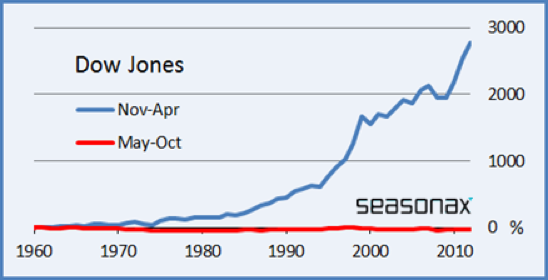 Almost all returns were generated in the six-month period centred on winter. Source: Seasonax

Practically all the performance across the fifty years was generated by the seasonally good months. So as you can see, a seasonal relationship can be stable for quite a while.

Precise data will help you even more

However, seasonal patterns can change over the course of a year, which means a precise analysis is essential. The next chart shows the average pattern for the Russel 2000 index relative to the season: 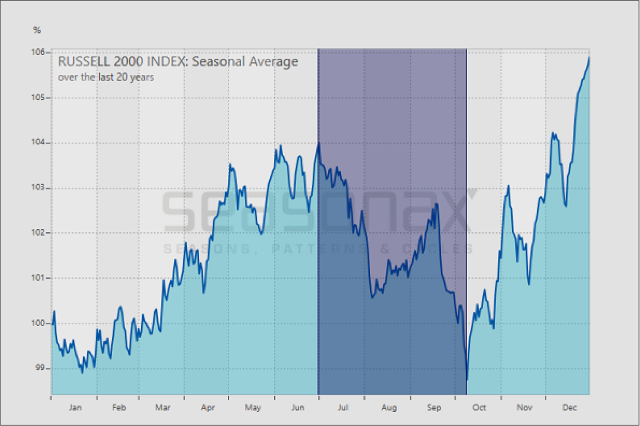 From the end of June onwards, the Russel 2000 index is seasonally weak. Source: Seasonax

The Russel 2000 index shows no further rise from May onwards, although it only starts to fall seasonally from the end of June. This highlights the importance of precise seasonal analysis.

In twelve out of twenty cases, the Russel 2000 index declined during this phase

The following bar chart shows you the return on investment for the Russel 2000 index for all years since 1996, between 30 June and 9 October.

On three occasions, there were losses of over 25%! Source: Seasonax

As you can see, in twelve out of twenty cases, the Russel 2000 index was down during its seasonally weak phase. Moreover, on three occasions, there were losses of over 25%!

The weak phase is gradually setting in: be on your guard!

The seasonal weak phase for the stock markets is gradually setting in, which means you will need to be more cautious. For one index, the weak phase will begin sooner, and for the other, it will begin later. There are even individual stocks that have their weak phase in completely different seasons.

Not convinced yet? Try Seasonax for free on Bloomberg Professional under APPS SEASON!