A recurring phenomenon is said to take place in the stock market every year: the Santa Claus rally, a.k.a. the year-end rally. It is held that stock prices typically rise particularly strongly just before the turn of the year. Does this phenomenon really exist, or is it a myth? Let us get to the bottom of the issue.

The chart below depicts the seasonal patterns of the S&P 500 index over a period of 30 years. 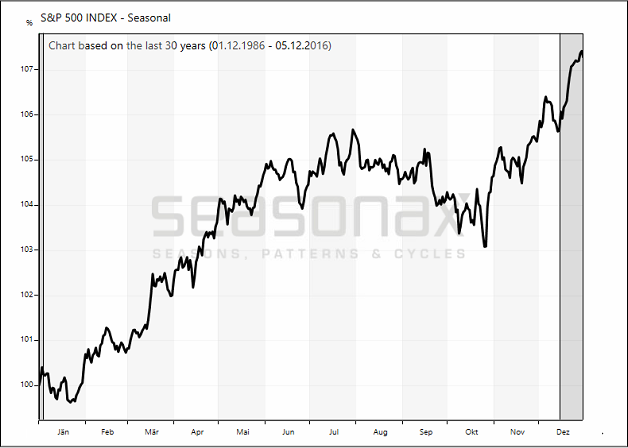 As can be seen, the S&P 500 Index typically rallies from the end of January until the end of May, then enters a choppy downward trend into October, which is followed by a renewed advance.

The positive seasonal period at year-end is highlighted with a dark gray background above. The year-end rally only begins on December 15 - prior to that prices often pull back. The rally typically lasts until January 3 of the next year.

Stocks are generating disproportionate gains at the end of the year

The average return of the time period from December 15 to January 3 amounts to 2.15 percent. Superficially this seems to be a small amount, but consider that it is achieved in a mere 19 calendar days. The average gain produced by the year-end rally is therefore equivalent to an annualized return of 50.45 percent.By way of comparison: over the entire 30 year period, the S&P 500 Index itself has only generated an average annualized return of 7.52%.

Is it a robust result though, or it is possibly an artifact produced by a few outliers? Let us take a closer look at the individual years.

The following bar chart shows the price moves in the time period from December 15 to January 3 for all years since 1986.

S&P 500 Index, percentage return between December 15 and January 3 for every year since 1986

Most of the time the S&P 500 rallies at year-end Source: Seasonax

From a statistical perspective, the yer-end rally represents a quite stable pattern. What causes the market's strength at the end of the year though?

One of the often cited reasons for the stock market rally at the end of the year is window dressing by investment funds, designed to prettify their results and coincidentally boost year-end bonus payments.

Less obvious psychological reasons, are probably more important though. These include the fact that people often take stock at the end of the year and position themselves for the new year. In addition there is the statistically significant holiday effect, which demonstrably tends to generate higher prices on occasion of other holidays as well. During Christmas time a strong desire to buy things may be spilling over into the stock market as well.

Christmas is after all a time of giving. So perhaps it should be no surprise that the stock market is often rewarding investors generously at this time of the year.

In order to access the Seasonax app, either type “APPS SEASON” into your Bloomberg Professional Terminal, or select the App Studio in the Thomson Reuters menu. The Seasonax App can be launched from there.