A Little Known Fact: Individual Stocks Exhibit Seasonal Trends of Their Own

You have probably heard about the Halloween effect or the autumn rally. The former term refers to the fact that stocks on average tend to perform significantly worse in the summer months than in the winter months, the latter term describes the typically very strong advance in stocks before the turn of the year.

Both phenomena apply to the broad stock market, i.e. the benchmark indexes.

Hasbro: seasonal strength from February to April
I have picked Hasbro, a manufacturer of toys headquartered in Pawtucket, Rhode Island in the US. You are very likely familiar with one of the company's products: Monopoly (a board game originally made by Parker Bros.).

Take a look at the typical pattern the stock exhibits in the course of a calendar year, which can be discerned at a glance on a seasonal chart. The chart below is calculated by averaging the performance of the stock over the past 20 years. The horizontal axis depicts the time of the year, the vertical axis the level of the seasonal pattern (indexed to 100)

Hasbro, seasonal pattern over the past 20 years 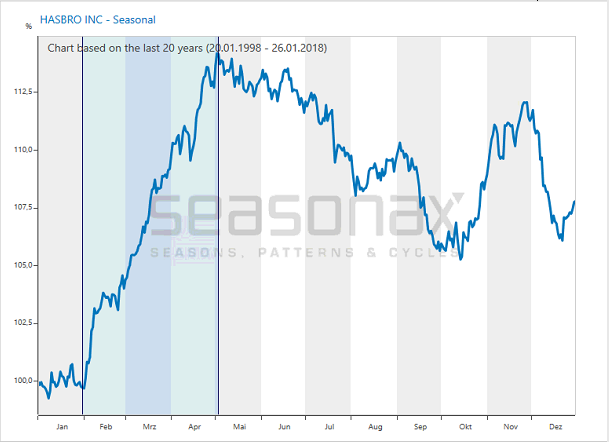 As the chart shows, Hasbro typically rallies very strongly in the three months to the end of April, but on the other hand the stock's seasonal pattern indicates that it tends to lose ground over the rest of the year.

The time period associated with the strongest seasonal performance is highlighted on the chart. It begins on January 31 and ends on May 2.

Hasbro's very positive performance at this time of the year diverges from that of benchmark indexes like the S&P 500. In seasonal terms, the latter typically barely rises in February, while it usually displays significant strength at the end of the year.

How frequent were rallies in Hasbro during the seasonally strong period? After all, it is theoretically possible that an outstanding performance in just a single year was responsible for this strong gain.

Hasbro, average return in percentage points from Jan. 31 to May 02, in every year since 1998

As can be seen, the green bars predominate both in terms of size and frequency. There were 16 rallies, while relatively small price declines were recorded in the remaining four years.

In short, the gains were widely distributed.

Where can one obtain information on the seasonal trends of individual stocks?

For this purpose, call up “APPS SEASON” on your Bloomberg Professional Terminal, or enter the App Studio in the Thomson Reuters Eikon menu and call up the Seasonax App from there. You can select any listed stock by entering its symbol into the text field of the app and quickly identify the most promising seasonal patterns.

You can also examine how your preferred stocks respond to numerous events such as for instance the release of important economic data, or monetary policy decisions by the Fed.

Moreover, Seasonax offers a seasonal stock screening service to institutional investors. We will set up a screening template containing the universe of stocks which are of interest to you and provide you with regular reports and updates detailing upcoming seasonal opportunities.