Could the Market Be Heading For a Crash? How Extreme Years Influence Seasonality.

The months of September and October are widely known to represent a seasonally particularly weak time of the year. Indeed, at no other time of the year is the S&P 500 Index falling as quickly as in the time period from September 20 to October 26. Is there a risk of a strong decline this year as well? We will take a closer look at this below.

The seasonally weak period in the S&P 500 Index lies directly ahead!

To begin with, I will show you the normal seasonal chart of the S&P 500 Index. It has been calculated based on the average of the returns achieved in the past 30 years and shows the typical seasonal behavior of the index. The horizontal axis shows the time of the year, the vertical axis the level of the seasonal index. 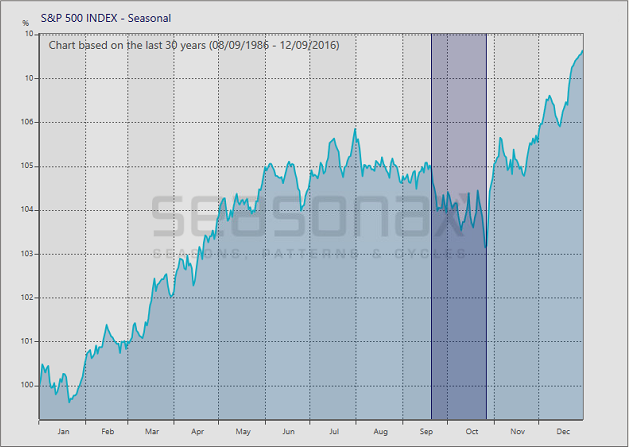 I have highlighted the seasonally weak period from September 20 to October 26 in dark blue. In these five weeks the S&P 500 tended to post a relatively strong seasonal decline. The average loss amounted to 1.59%, which due to the short time span corresponds to an annualized loss of 15.41%.

A detailed analysis shows that the performance of the S&P 500 during the seasonally weak period between September 20 and October 26 was positive in 16 of 30 instances. In years in which gains were posted, the average return amounted to 3.37%, while the average loss in losing years amounted to 6.97%.

This is quite remarkable. There are more rallies than declines in a seasonally weak period? Let us examine the matter further.

The bar chart below shows the return of the S&P 500 Index between September 20 and October 26 for every year since 1986. Green bars indicate years that have generated positive returns, red bars those which generated losses.

The market crashed on two occasions in this time period! Source: Seasonax

The next seasonal chart shows the seasonal trend of the S&P 500 Index with the data of the extreme
moves recorded in 1987 and 2008 filtered out. 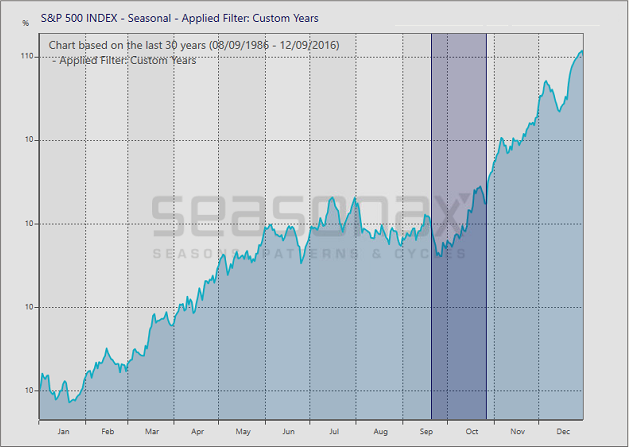 Particularly in October the trend improves quite a bit when extreme years are excluded. Source: Seasonax

The time period from September 20 to October 26 suddenly looks a lot better. Overall, prices even rise if one filters out the two extreme years.

This time period is therefore characterized by the fact that extreme price declines occur particularly often during it – recall in this context the crash of 1929, which happened in the month of October as well. Such extreme declines are on the other hand rare events, in most years this particular time period is quite inconspicuous.

Extreme tail events do happen in the stock market – they have to be taken into account, as they are always possible. There are however also seasonal patterns such as the year-end rally, or patterns in individual stocks around quarterly earnings reports, which exhibit a far steadier distribution of returns than the S&P 500 Index from September 20 onward.

In practice it often makes sense to focus one’s investment activities on seasonal patterns featuring steady distribution characteristics, in which prices move in the same direction in an especially large number of years. Thanks to Seasonax it is now possible for you to identify such phases quickly.