Evade the Market Weakness in Summer by Shifting Your Perspective

In the last issue of our Seasonal Insights we have talked to you about biotech and pharmaceuticals as an industry that withstands the traditional summer low on the stock markets. Six weeks ago, we have shown you that gold is an asset you can invest in the summer months to overcome this phenomenon. Naturally, investors also have the option to use traditional patterns in a different way. In this issue we will show you how a distinct seasonal pattern with recurring losses represents an opportunity to profit from going short. Let’s take a closer look at the media sector, traditionally performing very poorly during the month of August.

The months of July and August cause a lot of headaches around the financial markets worldwide. Stock prices tend to decline and profitable investment opportunities become scarce. However, there are other industries who deal with severe problems as well. Editors around the world are sweating on their desks not only because of the hot temperatures – they are desperately looking for news stories. Governments in many countries go on a summer break and the economy seems to be waiting for autumn to kick back off. A newly born panda baby in a provincial zoo suddenly becomes a sensation and as a result, readers are bored. Therefore, sales in the media sector traditionally drop in summer.

We have used our newly launched web app to find some strong corresponding seasonal patterns for some of the biggest media corporations. Let’s look at some of these examples!

Most American Corporations Suffer in August

The first stock we have identified is Viacom, which was founded in 2005 after the initial Viacom Inc. was split up into CBS Corporation (as the original entity) and a newly incarnated Viacom Inc. Its headquarters is in New York City and it has yearly earnings of more than 13 billion US Dollars in cable television, broadcasting, publishing, radio and motion pictures and employs roughly 10,750 people. 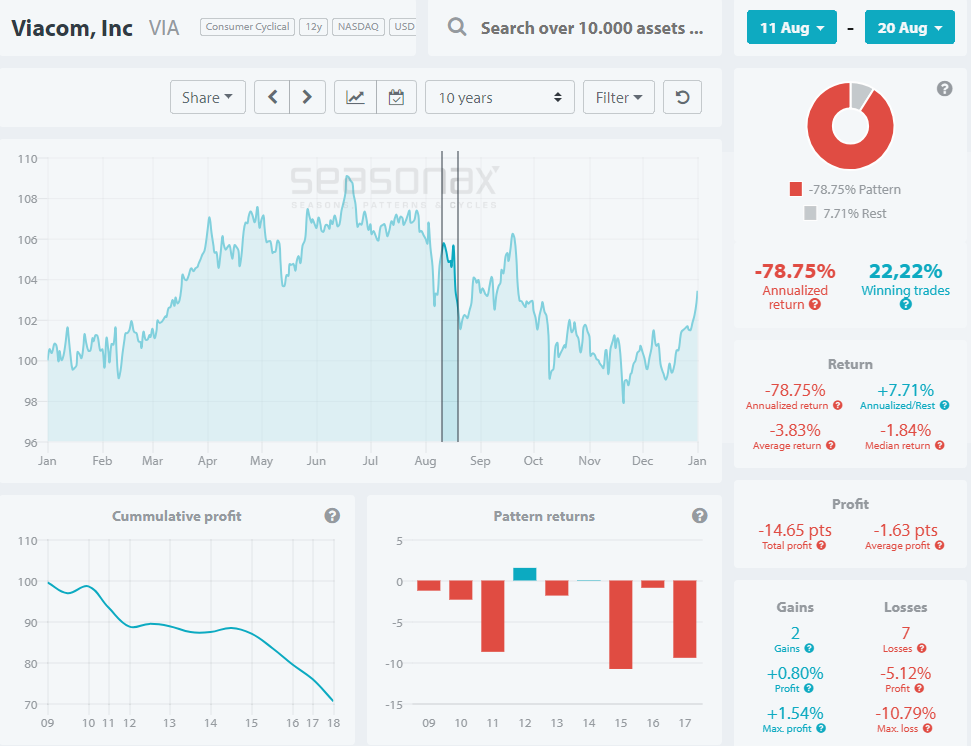 Additionally, we analyzed CBS Corporation. CBS Corporation founded Viacom in 1971 but was acquired by its subsidiary company in 1999. As mentioned above, in 2005, however, the companies split again by newly incarnating Viacom Inc with CBS Corporation continuing the business of the original Viacom. CBS operates in commercial broadcasting, publishing and television production and has a yearly revenue of almost 14 billion US Dollars. 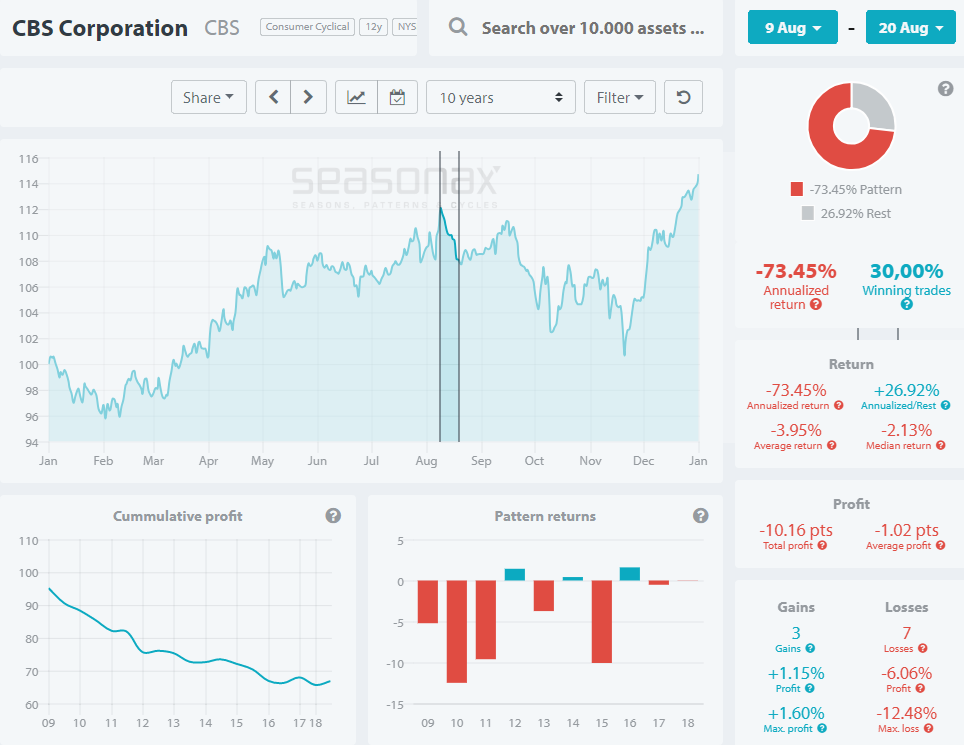 CBS showed losses in two thirds of the respective time-period. However, these losses were severe.
Source: Seasonax Web App

To show you that this phenomenon is not exclusively found in the US, we have used our app to analyze various international stocks. We have found an interesting pattern on the Hong Kong Stock Exchange. Oriental Press Group is an investment holding based in Hong Kong, principally engaged in the publication of newspapers. It has yearly earnings of almost a billion HKD. 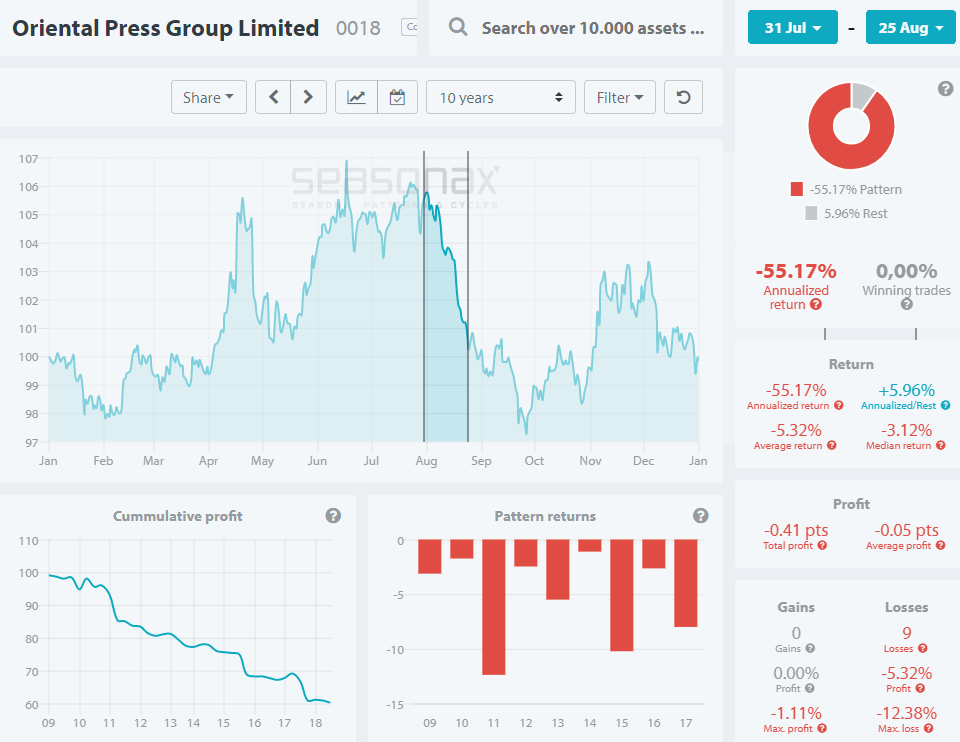 Oriental Press Group has shown strong losses during the month of August in every of the last 10 years (the low continues until October with August representing the sharpest decline).
Source: Seasonax Web App

What can we learn from the above examples? It is not a very unique insight, that stock prices tend to fall in the month of August. However, by using a systemic approach and a tool like our app you can identify patterns that go beyond simple truisms. Two weeks ago, we have learned that biotech and pharmaceuticals is an industry that shows a different pattern than the general trend. This week, we have shown you an industry that exhibits a particularly strong seasonal pattern with severe losses. You can use this as an investment opportunity by taking a short position, or you can simply make sure to show greater caution when looking to include stocks from the media sector into your portfolio during the summer months.

To sum up, by employing a systemic approach like we do, you are able to classify certain industries with regards to their seasonal investment potential. By doing so, you can operate more time-efficient and more profitable at the same time.

Find your own seasonal patterns and carry out your individual analysis by using our Seasonax Web App. If you have any questions, check out our explanatory video or simply get in contact at support@seasonax.com.

And always remember that there are no guarantees in the markets, but you can let probabilities work in you favour!