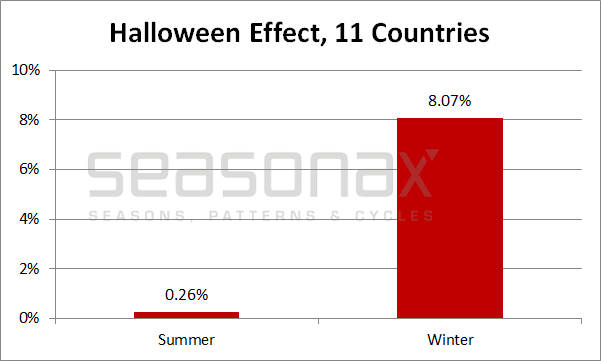 Almost the entire return was generated in the winter months.

The division into two time periods of equal length is merely a matter of convention though. Greater precision is possible, as I will demonstrate below.

The precise seasonal pattern of the MSCI World Index

The MSCI World Index is widely used as a proxy for global stock markets. However, one needs to be aware that US stocks have a weighting of more than 50% in the index. Thus it represents a disproportionately small share of the stock markets of other countries. The chart below shows its seasonal pattern. This is not a standard price chart; instead it depicts the average pattern of the MSCI World Index that emerges in the course of a calendar year. The horizontal axis shows the time of the year, the vertical axis the average percentage moves of the index over the past 30 years. Thus the seasonal trends of the index can be precisely discerned at a glance.

MSCI World Index, seasonal pattern over the past 30 years 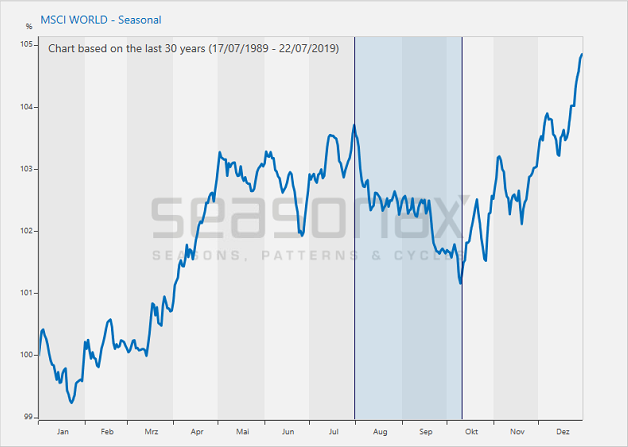 Global stock markets tend to exhibit seasonal weakness between the end of July and early October.

As can be seen, the MSCI World Index typically declines within the summer half-year from late July until early October. However, it tends to rise moderately until the end of July, and only begins to weaken thereafter. This demonstrates the importance of precise seasonal pattern analysis. I have highlighted the seasonally weak period in the MSCI World Index in blue on the chart. It starts on July 31 and ends on October 10.

The MSCI World Index declined in 16 cases out of 30

But what were the returns generated by the index in individual years? The following bar chart shows the return of the MSCI World Index between July 31 and October 10 in every year since 1989. Green bars indicate years in which the index rose, red bars show years in which it declined.

MCSI World Index, percentage return between July 31 and October 10 in individual years since 1989

Large losses were recorded on several occasions, with the worst reaching 33.39 percentage points!

The color red is clearly dominant in this illustration. While declines did not occur at a significantly greater frequency than rallies (16 vs. 14), the declines were far larger than the rallies. In short: over the coming two and a half months, the probability that stock prices will rise is almost equal to the probability that they will fall. However, if a decline does happen, it is likely to be especially strong. In other words, danger lies directly ahead!

Check out the seasonal patterns of other instruments as well!

What are the seasonal patterns of individual country indexes? And are there perhaps individual stocks that enter a strong seasonal phase at this particular point in time? With the help of the exact daily charts of Seasonax, seasonal trends can be identified with precision. Moreover, detailed statistics are available at a single mouse click. Interested? Find out more here