How Big Is the Threat of a Crash in the 7th Year of the Decade?

Years ending in 7, such as the current year 2017, have a bad reputation among many stock market participants. Large price declines tend to occur quite frequently in these years.

Just think of 1987, the year in which the largest one-day decline in the US stock market in history took place: the Dow Jones Industrial Average plunged by 22.61 percent in a single trading day. Or recall the year 2007, which marked the beginning of the great financial crisis.

Given that the current year is ending in 7 as well, is there a reason to be concerned, or is the supposed pattern a myth?

Below you can take a look at the typical pattern of the DJIA in the course of a decade.

The chart shown below is not a standard chart. Instead it shows the average pattern of the DJIA in the course of a decade since 1897. The horizontal axis shows the years of the decade, the vertical axis the average performance of the index. Thus one can discern at a glance how the index typically performs in individual years depending on their last digit.

DJIA, typical pattern in the course of a decade since 1897 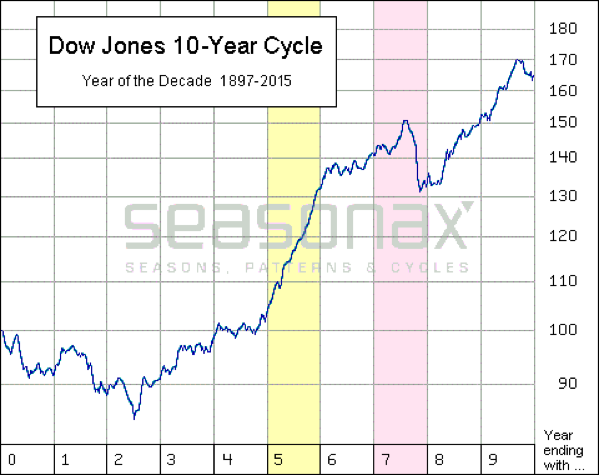 Years ending in 7 tended to be marked by large setbacks. Source: Seasonax

As you can see, in the first half of the decade, i.e. in the years ending in 0 to 4, the DJIA overall barely rose on average. By contrast, in years ending in 5 (highlighted in yellow above) the performance of the index tended to be particularly strong.

Alas, years ending in 7 (highlighted in red) typically saw a sharp retreat in prices in the second half of the year.

Thus it appears as though the stock market is indeed generating a specific pattern in a 10-year cycle. Is this sheer coincidence, or does such a 10-year stock market cycle indeed exist?

In order to assess that, we will take a close look at the 19th century as well. Due to the length of the 10-year cycle there are basically no other time periods one can sensibly review in this context.

The 10-year cycle in the 19th century

The next chart shows the pattern of the 10-year cycle during the 19th century.

Note: in this time period, average stock price increases were far less pronounced than thereafter. As a result the values on the vertical axis are noticeably smaller. 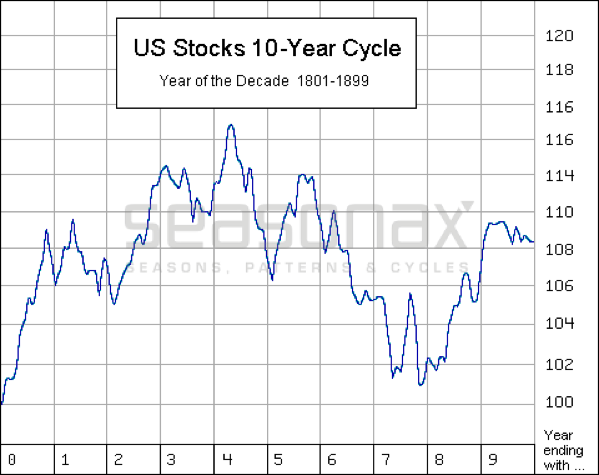 In the 19th century prices declined in the second half of years ending in 7 as well. Source: Seasonax

As you can see, in the 19th century, stock prices on average also tended to fall in the second half of years ending in 7.

However, overall the 10-year cycle pattern in the 19th century was nevertheless quite different from the pattern shown in the first chart that evolved thereafter. One obvious example is that back then the market tended to rally in the first half of the decade, and essentially went sideways in the second half.

As you can see, compared to annual seasonal patterns, in the course of which certain phenomena such as the year-end rally tend to recur remarkably often, the 10-year cycle pattern appears to be a less stable phenomenon. Why is that?

There is no sound fundamental reason for these patterns. Perhaps the 10-year cycle triggers certain human behavior as well – e.g. in the form of a self-fulfilling prophecy, as people who are aware of the pattern may take action based on it. But that does not suffice to make the 10-year cycle a pattern likely to strongly influence market trends.

The case of annual seasonality is different. Numerous factors can be shown to have an impact on it: the weather, holidays, earnings reporting dates, and the associated effects, such as window-dressing or recurring industry-specific events such as e.g. fairs. Annual seasonality can help you to optimize investment strategies for numerous financial instruments by taking advantage of the information provided at www.seasonalcharts.com or www.seasonax.com. Additional stable cycles and also event-related market patterns can be found there – as recurring patterns are not only based on annual seasonality.