Is a Rapid Advance in the Japanese Stock Market Imminent?

The Japanese stock market is quite unique: it would need to rally by approximately 80% to reach its former historical peak. What's more, said peak was attained on the final trading day of 1989, more than 25 years ago. In short, Japanese stocks have been anything but a good investment.

Japanese market about to break out

Conversely this means that the market has a lot of potential if it were to return to its former heights. It also means that the Japanese market hasn't mirrored the excesses evident in many other stock markets. 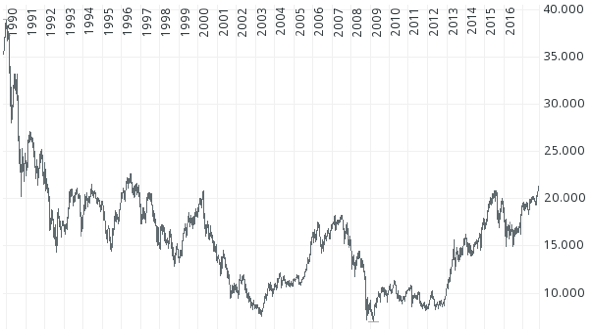 Seasonal strength in Japan lasts until early May

In addition to this, the Japanese market displays a period of pronounced seasonal strength until early May. The seasonal chart below depicts the typical pattern of the Nikkei 225 in the course of a year, calculated by averaging the returns of the past 47 years. The horizontal axis shows the time of the year, the vertical axis the seasonal performance of the index.

Nikkei 225, seasonal pattern based on 47 years of data 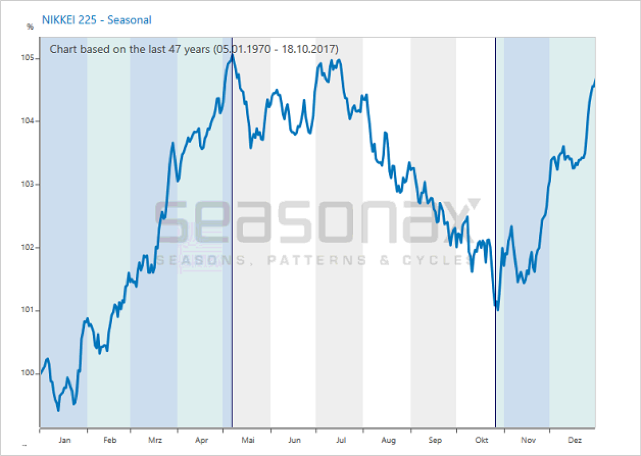 As can be seen, the Nikkei typically rallies from late October until early May of the next year.

The interesting seasonal period is highlighted in blue on the chart. It begins on October 26 and ends on May 6 of the next year. The average return the Nikkei 225 has generated in this time period over the past 47 years was 9.18 percent. This amounts to an impressive annualized gain of 18.18 percent.

Keep in mind that numerous bear market years are included in the statistic. If Japan had experienced an extended bull market similar to other major global stock markets, one should expect to see even better figures.

The time period between October 26 and May 6 generated positive returns for investors in Japanese stocks in 36 of 47 years.

The bar chart below shows the return the Nikkei delivered in this time period in every single year since 1970. The red bars show years in which the market lost ground, the green bars those in which gains were posted.

Nikkei 225, percentage return generated between Oct. 26 and May 6 in every year since 1970

Positive returns clearly predominate. The strongest seasonal pattern return was delivered in 2012 and amounted to a stunning 58.74 percent!