Seasonal charts enable one to discern seasonal trends at a glance, and see during which time periods precisely an instrument's prospects are strong and what returns were generated on these occasions in the past.

I would nevertheless recommend taking a closer look at positive seasonal phases before entering into a trade. I want to explain the reason for this by discussing two examples, namely two stocks which exhibit a promising seasonal chart pattern. However, one should buy only one them based on its seasonal performance.

German company Infineon Technologies was established in the course of Siemens AG splitting off its semiconductor business. The seasonal chart below illustrates the stock's seasonal pattern. I have highlighted the most striking seasonal rally phase in blue. It begins on March 10 and ends on May 7.

Infineon, seasonal pattern over the past 15 years 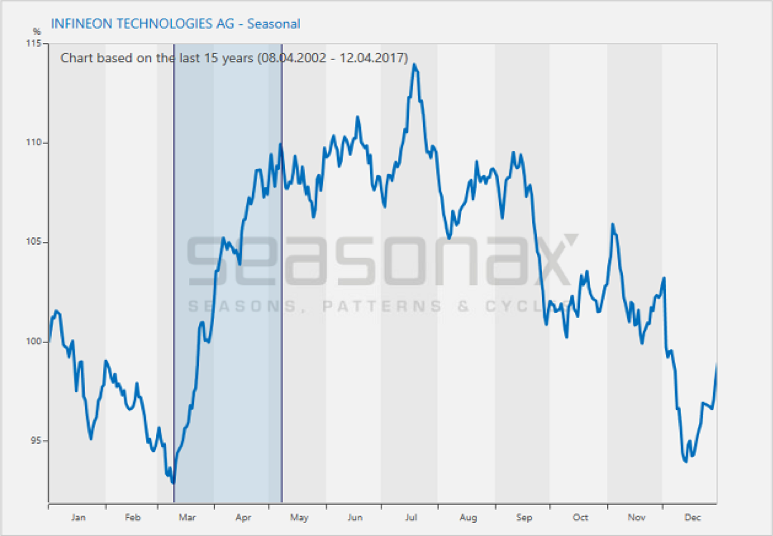 A seasonal rally in Infineon appears to begin in March. Source: Seasonax

Let us take a closer look at this time interval by examining individual years. We can see that Infineon's stock price rose in 2009 from EUR 0.36 to EUR 2.33 in the highlighted time period, this is to say by a quite remarkable 549.72 percent. This outlier was the result of company-specific developments at the time.

The bar chart below shows the returns generated by Infineon's stock between March 10 and May 7 in every year since 2003. Green bars indicate years in which profits were generated, red bars years in which the stock lost ground. The year 2009 stands out significantly.

One year was a strong outlier. Source: Seasonax

In other words, there was one year that was completely different compared to all other years. Now we will remove this particular year from the calculation. The next chart illustrates the seasonal pattern of Infineon's stock without the return generated in 2009. 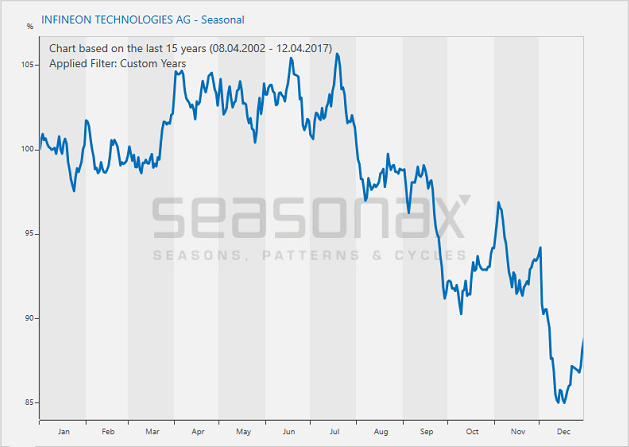 By filtering out 2009, a chart is created that provides a more realistic depiction of the stock's seasonal pattern. The rally beginning in mid March has largely disappeared.

The outlier year cannot serve as the basis of a sound investment decision, given that the price trend in 2009 was the result of an exceptional situation that had nothing to do with seasonal trends.

The example of Infineon demonstrates the importance of conducting a thorough analysis before making investment decisions!

Is the Seasonal Trend of Align Technology More Stable?

I have picked another stock that has a strong seasonal rally from April to May: Align Technology. The chart below shows the seasonal pattern of the medical supplies company, with the strong rally phase once again highlighted in blue.

Align Technology, seasonal pattern over the past 15 years

Between April 11 and May 11, Align Technology rose by a respectable 11.33 percent on average. This gain was generated in just a single month. If compounded over a year, this is equivalent to an annualized gain of 269.48 percent.

An excellent result! It underscores the potential inherent in selecting individual stocks based on their seasonal characteristics.

Let us now look at the distribution of the returns generated in this time interval of just one month over all 15 years.

A rally took place in 11 of 15 cases. No single year stood out in particular – a significant difference to the above discussed stock of Infineon.

The chart below shows the distribution of the returns in detail.

Align Technology, percentage returns generated between April 11 to May 11, in all individual years since 2003

As can be seen, there are five green bars of almost the same height, as well as six shorter ones. Thus the strong seasonal rally phase was not due to a single outlier, but developed over many years.