Indeed, there is probably no stock market rule that will remain valid forever.

However, there continue to be stock market phenomena – even quite simple ones – that tend to persist for very long time periods.

What I examine in today's report represents such a phenomenon: the performance of the S&P 500 Index on individual days of the week.

Tuesday is a particularly strong trading day, Friday a weak one

The chart below shows the annualized performance of the S&P 500 Index since the turn of the century in black, as well as the cumulative annualized return generated on individual days of the week in blue.

I have measured the price changes from close to close; thus the performance of e.g. Tuesday, represents the difference between the close on Monday and the close on Tuesday. 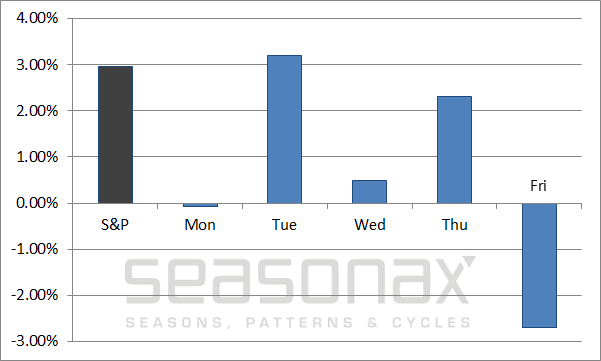 Friday is on average a down day. Source: Seasonax

As you can see, two days are standing out in terms of positive performance: Thursday, and particularly Tuesday. The cumulative return of the stock market on Tuesdays alone was actually better than that achieved on all five trading days combined!

By contrast, Friday was on average quite weak. On Mondays and Wednesdays the market by and large tended to move sideways.

The difference, which was measured over no less than 4,436 trading days, is quite significant. This suggests it is unlikely to merely be a random phenomenon.

What do these data look like in specific market environments though, i.e., during bull and bear markets?

The days of the week under the microscope

The next chart shows the performance of the S&P 500 Index since the turn of the century in black, as well as the cumulative return achieved on individual days of the week in other colors – all indexed to 100. 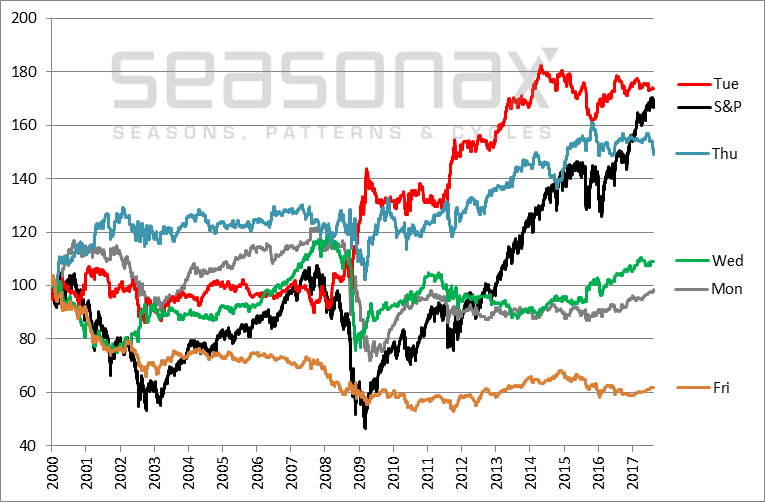 Even in 2008 investing exclusively on Tuesdays generated a gain! Source: Seasonax

Take a close look at the performances during the bear market after the year 2000 peak and in the course of the 2008 financial crisis. Even in these otherwise difficult times for the market, Tuesdays (red) and Thursdays (blue) delivered pretty decent results.

In 2008, the cumulative return generated on Tuesdays was even significantly positive, against the market trend!

In short, these two trading days are indeed rather extraordinary.

By investing only on Tuesdays, one would have been able to outperform the market over the entire period examined above. However, in rally periods such as that beginning in 2009, the cumulative return achieved on Tuesdays lagged behind that of the trading week as a whole. That should actually be expected, as strong gains require longer investment periods, investing during just 20 percent of the time is simply not enough.

This problem can be addressed by combinations. As already illustrated in the first chart, the S&P 500 Index has gained 2.95% annualized since 2000, while the cumulative gain of all Tuesday trading sessions was 3.19%.

Combinations make a big difference though. Tuesdays and Thursdays combined would have generated an annual return of 5.52%. If one had additionally sold the market short on Fridays, the annualized gain would have improved to 8.07% – an excellent result!

Alas, there is a disadvantage to this as well: the returns generated on individual days of the week are interdependent. Thus it is e.g. conceivable that in the future, in an otherwise slightly positive stock market trend, Tuesdays and Thursdays are no longer strong over the entire investment period, but turn out to be weak instead. In that case, it would be quite unlikely for returns on Friday to remain as weak as they have been to date. In short, all three partial components of the strategy would then have an unfavorable effect on the result.

From a statistical perspective, it is as a rule better to combine independent factors, such as those that can be found with the help of the Seasonax app on Bloomberg and/or Thomson Reuters. The probability that what was valid in the past will continue to be valid in the future is higher that way.