In the last issue of Seasonal Insights I discussed the typical pattern of stock prices when the Federal Reserve cuts interest rates.

As one would expect, the stock market tends to stabilize after cuts in the federal funds rate. The issue is topical, as many investors and analysts expect rate cuts to be implemented soon given that signs of an economic slowdown are beginning to proliferate.

Today I want to examine a market that reacts differently to rate cuts than one would perhaps expect: the foreign exchange market.

What is the effect of Fed actions on exchange rates?

I use the Seasonax app in order to study the impact of rate cuts on the foreign exchange market quickly and comfortably – more about the app at the end of this article.

The chart below shows the average pattern of the US dollar index (DXY) in the 140 days before and after cuts in the federal funds rate. The pattern was calculated as an average of the past 30 years, which included altogether 46 rate cuts. The horizontal axis shows the number of days before and after the event, the vertical axis shows the average moves of the dollar index in percentage points. The day of the rate cut is highlighted in orange in the middle of the chart. 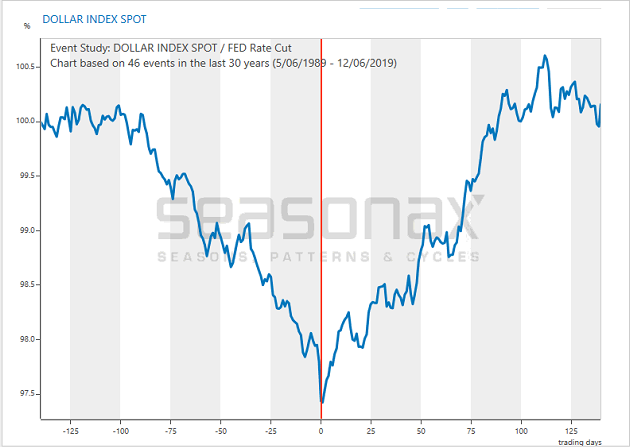 Rate cuts mark the timing of trend reversals in the dollar with pinpoint precision! Source: Seasonax

As can be seen right away, on average the US dollar declined in the months leading up to rate cuts. However, the trend typically reversed precisely on the day the rate cut was implemented. As the chart illustrates, thereafter the dollar tended to appreciate for several months.

Why do exchange rates behave so strangely?

Perhaps you expected that the dollar would decline in concert with the federal funds rate – after all, investment in US dollar-denominated fixed-rate instruments becomes less attractive. In reality the US dollar typically strengthens after a rate cut.

Let me take this opportunity to give you the reason for the dollar's odd behavior favored by myself.

Rate cuts are relatively easy to predict. Many investors will therefore already be positioned accordingly and will tend to close out their positions once rate cuts are actually implemented - “sell the rumor, buy the news”, as the saying on Wall Street goes.

Take advantage of the Fed's predictability...

There are certainly other possible explanations.  Thus rate cuts are often associated with crisis scenarios. In crisis conditions demand for US dollars often increases, either due to the need to repay USD-denominated debt, or because the dollar is considered a “safe haven” currency. Economic considerations may play a role as well.

Contrary to my preferred reason that this behavior represents a “sell the rumor, buy the news” situation, these approaches cannot explain why the trend changes coincide precisely with rate cuts. The reasons cited above nevertheless may play a role as additional drivers.

...by simply making use of empirical studies!

In the past it was possible to take advantage of the Fed's predictability in the context of a contrarian investment approach. However, rate cuts only happen occasionally. As an investor, you require more input.

Fortunately a great many more events and cyclical drivers affecting market trends exist. You can easily find out about them for yourself with the help of the web-based Seasonax app at app.seasonax.com/about or alternatively with the Seasonax app on Bloomberg or Thomson Reuters. That way you will without a doubt gain further surprising and useful insights!