First I will show you the seasonal chart of silver. The chart shows the average moves in silver prices in the course of a calendar year over the past 69 years. The horizontal axis shows the time of the year, the vertical axis depicts price information.

With the help of this chart, seasonal trends can be identified at a glance. Note: the seasonal pattern does not end at the turn of the year, but actually continues at the beginning of the year (i.e., on the left hand side of the chart).

Silver price, seasonal pattern over the past 69 years 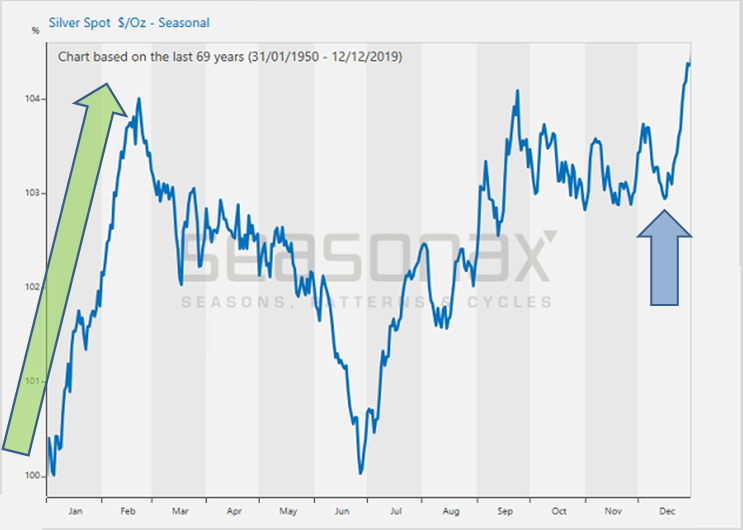 As the chart illustrates, on average silver tends to post the by far strongest price gains early in the year until peaking close to the end of February. This rapid advance begins in mid December (blue arrow). Thereafter the price typically retreats again.

Thus silver makes a move in excess of its total annual seasonal gain over the coming two months!

The seasonal rally is caused by fundamental drivers
The strong seasonal advance is very likely driven by purchases from the manufacturing industry. Many industrial silver processors/users place the bulk of their purchase orders at the beginning of the new financial year once annual planning has been completed and new orders can be booked.

If you purchase silver ahead of this phase – to be precise, in mid December – you will buy at a fairly reasonable price from a seasonal perspective and stand to benefit from the strong seasonal rally.

Platinum prices offer a seasonally favorable entry in mid December as well
But what is the situation with other precious metals? Next I will show you the typical seasonal pattern of platinum over the past 32 years.

Platinum price, seasonal pattern over the past 32 years 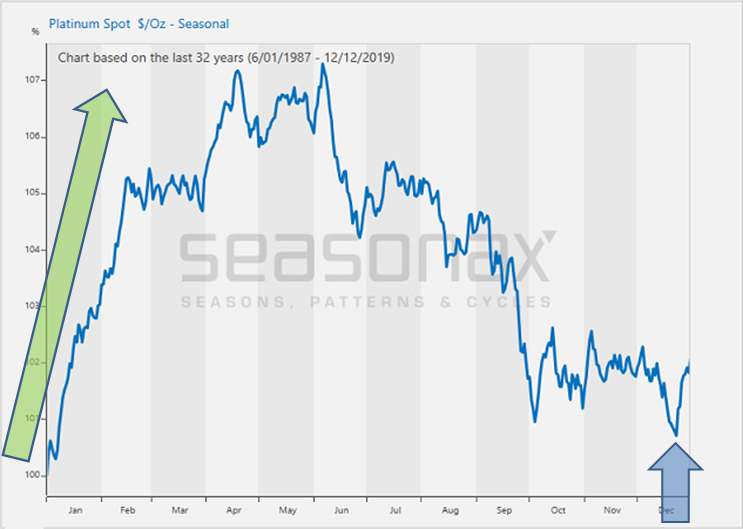 As the chart shows, platinum exhibits a very similar seasonal pattern. Just as silver, it rises strongly from mid December almost to the end of February.

Contrary to silver, platinum displays a further seasonal advance in April, but subsequently these gains tend to be retraced almost in their entirety.

In light of the fact that similar to silver, the seasonal rally in platinum is associated with the turn of the year, it is probably attributable to the same fundamental reason: purchases related to the new financial year!

Gold, silver, platinum: all the same?
Perhaps you think now that the seasonal trends of gold look similar. After all, there is a strong positive correlation between silver and gold prices. Or could it be different, given that gold prices are moved by other fundamental drivers?

If you want to find out about the seasonal pattern of gold, or those of your favorite stocks, or if you want to learn about optimal timing entry and exit points with seasonal data, I recommend visiting app.seasonax.com – which can be used free of charge for gold and other important instruments.  As an institutional investor call up the Seasonax app at Bloomberg or Thomson-Reuters Eikon.