At the beginning of November this year, the US presidential elections will take place, just as they do every four years. During election years, investors often become excited about the results, hoping for a victory for the candidate with what they perceive to be the best economic policy.

But for you, two other phenomena are far more interesting.

The first phenomenon is related with the acting president’s monetary and economic policies. In this chart you can see marked out in blue the average price development of the S&P 500 Index during election years. The scale to the left of the blue area shows performance in percentage terms.

During the first half of an election year, prices typically move in a sideways direction with fluctuations. After this the S&P 500 grows until the beginning of September, before returning to a sideways trend towards the end of the year. 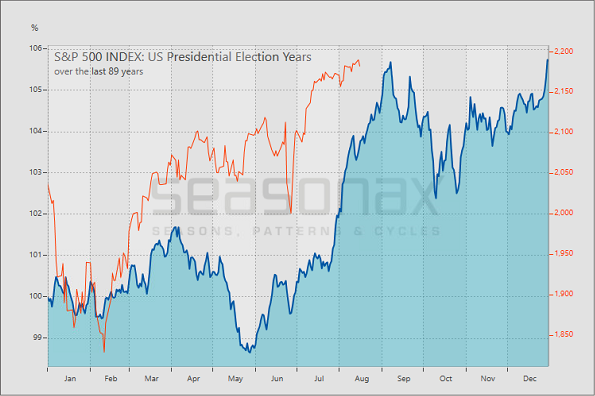 This year the S&P 500 has performed as it often does in election years. Source: Seasonax.

Marked in red on this chart you can also see the current course of the S&P 500 (the right-hand scale). Notice the confirmity: in the middle of January and at the beginning of February there were interim lows at almost the same time, before growth until April; it fell again until the end of May, before correcting again almost simultaneously at the end of June. Since then prices have been and still are growing – the way they do in a typical election year.

Seasonality increases the likelihood of returns.

As with everything that is related to the stock market, seasonal trends do not occure always fully and entirely accurate. Rather, they should be used to tilt the odds in your favour, boosting your profit and reducing risk.

It is nice when the current price performance visually corresponds with seasonal trends at so many distinctive points as in this example. Precision like this is good to have – but when it comes to investment, the consistent use of statistically-backed models is what promises success.

No tightening before elections.

Why is there a typical pattern for election years? Monetary policy is one answer. The Fed is terrified of stepping on the brakes before an election. It doesn’t want to influence the election – and in doing so, it does just that.

Then there are the politics of the incumbent president. A regorous budgetary policy is normally
made after elections, when politicians don’t have to worry about the voters anymore. Before elections, on the other hand, the economy is stimulated a bit – often by borrowing – so that voters feel good and will then vote for the incumbent president or their party’s nominee.

As you can see, when it comes to elections – just as with many other events – the time before the event is when things are interesting! However, most investors tend to focus on the outcome of the election and the period following it.

Immediately before the election the S&P 500 rises.

But there’s also a second phenomenon that is linked to elections. Take a look at the following chart to see what it is. It shows the average S&P 500 development in the 21 days before and after the election. 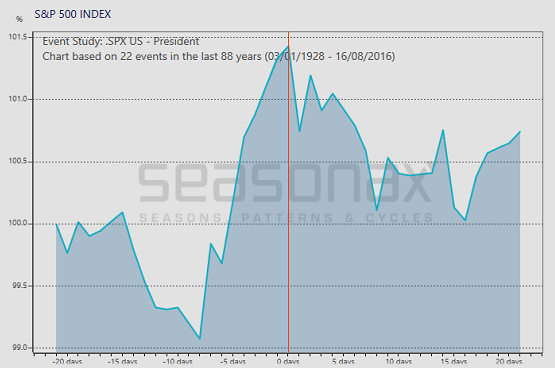 The S&P 500 grows before the election and falls afterwards. Source: Seasonax.

The chart has been calculated using the last 22 election events. The horizontal axis shows the number of days before and after election day, while the vertical axis shows the average price performance in percentage terms.

This chart is more than simply a magnified version of the previous one, showing more clearly the period at the beginning of November. Rather, it picks out the election day – which isn’t always on the very same calendar day – and lines up the developments before and after that date. This gives a far greater degree of accuracy.

This shows you at a glance that the S&P 500 grows in the days prior to the election. After this, the trend is going down.

Rising stock prices in the days prior to the election are not limited to the US alone. For example, they
appear also in Germany where prices typically increase in the days before elections of the federal parliament. Why does this happen?

This happens because of psychology: most people take a big interest in the election. They hope their own candidate will win, and will implement a better economic policy. This hope that things will get better drives prices up in the days immediately before the election.

Then after the election, around half of voters are disappointed. This is psychologically damaging – and has a correspondingly negative effect on market prices.