Market Efficiency? The Euro Is Looking Forward to the Weekend!

You can look up the intra-week patterns of these and other tradable instruments in past issues of Seasonal Insights.

A number of readers have inquired whether currencies exhibit such patterns as well. Are these large markets also home to such statistical anomalies, or is market efficiency winning out in this case?

Let us take a closer look.

The euro: weak on Mondays, strong on Fridays!

Below I examine the performance of the EUR-USD exchange rate broken down by individual days of the week.

The chart shows the annualized performance of EUR-USD since 2000 in black, as well as the performance on individual days of the week in blue. 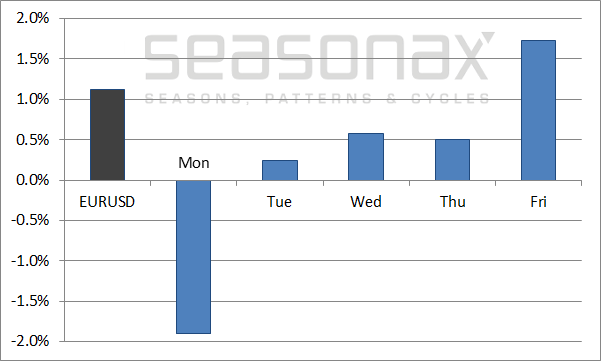 The euro is weak on Mondays, but very strong on Fridays. Source: Seasonax

As the chart illustrates, two days are standing out: the euro’s performance on Monday was on average quite weak, but its performance on Fridays was very strong. The special status of these two days of the week is very pronounced: on Mondays the euro declined by 1.90 percent annualized on average, while it rose by 1.73 percent annualized on Fridays. Over the week as a whole, the average annualized gain totaled just 1.12 percent.

Thus investors who held the euro exclusively on Fridays were able to reap stronger returns than those who held the currency through all days of the week!

The special status of Mondays is quite pronounced as well, albeit in the opposite direction.

It appears that in the realm of currencies there exist not only long-term cyclical patterns such as annual seasonality (which you can easily look up at www.seasonalcharts.com, or in the Seasonax App), but also typical specific intra-week patterns. Let us take a look at these patterns in more detail.

The next illustration shows the overall performance of EUR-USD since the turn of the millennium in black, as well as the cumulative performance of the currency pair on individual days of the week in other colors. 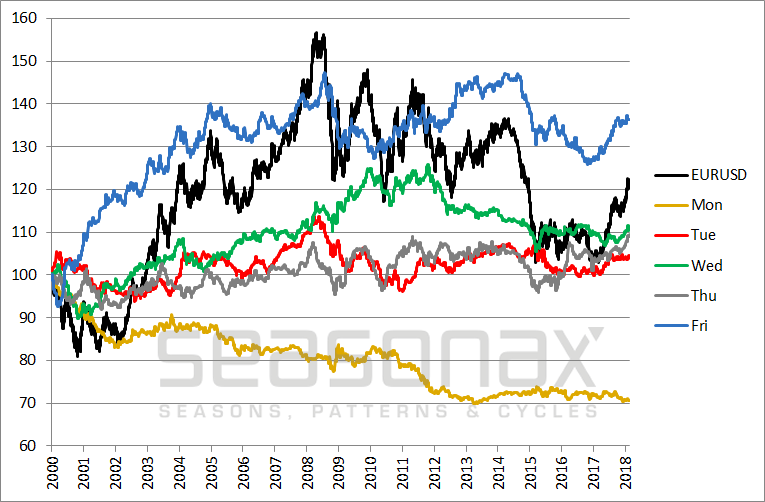 The performance on Fridays beats them all! Source: Seasonax

Statistical anomalies exist also in the realm of currencies!

We have already discussed the effects the FOMC meeting exerts on the euro, as well as the euro's annual seasonal pattern – in connection with the latter we were able to establish a sound rationale for the existence of the pattern in the form of US tax regulations. We have now addressed a third recurring statistical anomaly in the form of the euro's intra-week pattern. Particularly the two days surrounding the weekend are standing out in this context. As an aside, in the Seasonax App you can also look up the precise average intra-day patterns of EUR-USD on Mondays and Fridays.

As this study clearly shows, anomalous week day patterns are quite pronounced in currency exchange rates as well. As a trader, investor or dealer you can take advantage of these and other statistical anomalies. You can do so by either visiting my free-of-charge web site www.seasonalcharts.com, or by calling up the Seasonax App on your Bloomberg or Thomson Reuters system. There are never any guarantees in the markets, but you can certainly let probabilities work in your favor.