In this issue of our Seasonal Insights, we will use a hands-on example, German shoe manufacturer and lifestyle brand Puma, to illustrate the process of our seasonal analysis. We will show you how to profit from its strong seasonal pattern. In order to do so, we will use our newly launched web application, Seasonax Web App, for which you do not need access to a Bloomberg or Thomson Reuters terminal.

Those of you, who also follow our monthly trading picks, might have noticed the familiarity between Puma and our trading pick for March 2018 – Adidas. These two companies are not only competitors in the same markets, but inseparably tied together due to their history. Legendary German shoe manufacturers, brothers Rudolf and Adi Dassler, founded the company Sportschuhfabrik Gebrüder Dassler in the 1920s. Quarrels between the brothers during and after World War 2 let to the founding of two separate companies – Adidas and Puma. After having analyzed Adidas before, we will now take a closer look at Puma.

Puma as an example for strong seasonal patterns

After having struggled severely in the 1990s and early 2000s, Puma has shown a strong turnaround. Even though, its competitors Nike, Adidas and Under Armour have recently shown bigger success, Puma is established as a sports goods manufacturer and lifestyle brand. It is well-known for sponsoring the Jamaican running team and most importantly Usain Bolt, German football team Borussia Dortmund and British Formula 1 star Lewis Hamilton.

When I used our new web application app.seasonax.com to analyse Puma’s stock, I realized there is an even stronger seasonality than what we found for Adidas. Our app allows you to analyse any time-period that interests you. I found that from February 25th to May 2nd, the stock showed the greatest seasonality.

Our application gives you more opportunities than to merely visually depict seasonal trends. You have the option to share or save the charts, to use them for presentations or other purposes. Furthermore, you can look at the cumulative profits as well as the pattern returns – both are illustrated in appealing charts.

Screenshot from the application, showing cumulative profits of the stock since 2004.
Source: app.seasonax.com

Screenshot from the application, showing pattern returns of the stock since 2004.
Source: app.seasonax.com

As the illustrations and statistics above already indicate, Puma has delivered stable returns in almost all years of the examined time-period. A closer look at the statistics shows an extraordinary annualized return of almost 75%. To further analyse the stock and back your trading decision, you can access the detailed statistics. 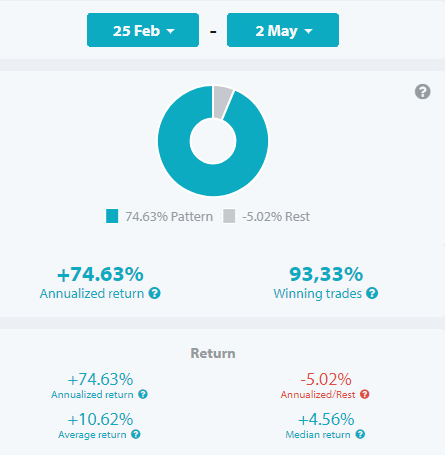 Screenshot of the visualized key stats for the stock.
Source: app.seasonax.com

Screenshot of the detailed statistics section within our application.
Source: app.seasonax.com

The above-mentioned statistical evidence suggests Puma’s stock as an excellent seasonal investment opportunity. As you can see, this year was no exception and trading our recommended stock would have resulted in profits for the respective time-period.

Naturally, there are no guarantees in the market, but you can do your best to let probabilities work in your favour!