The typical election year under the magnifying glass

The chart below depicts the typical pattern of the Dow Jones Industrial Average (DJIA) in election years. In a way, it represents a seasonal chart, but with only every fourth year used in the calculation of the pattern. Thus it shows the average move in stock prices in election years since 1900. 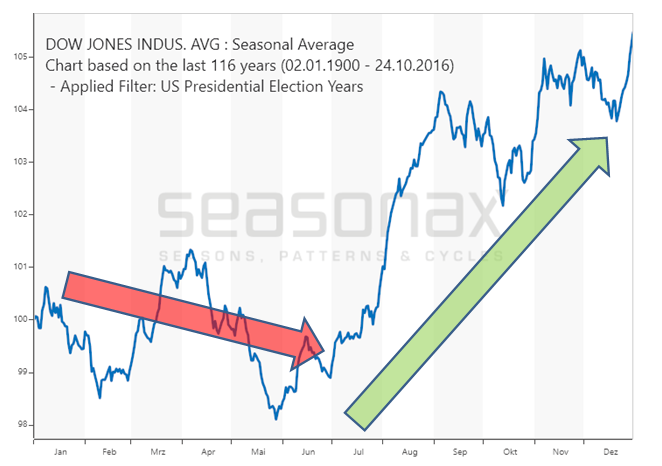 The market typically tends to move sideways in the first half of the year.

As the chart illustrates, stocks tend to struggle at the beginning of election years. In the first six months the market on average enters a sideways trend with a moderate downward bias. A rally begins only thereafter and establishes an interim peak in early November when the election actually takes place.

A difficult start threatens in 2020!
What conclusion can be drawn from this with respect to the coming months? An average sideways trend in the first half of the year indicates that prices rose in some years and declined in others.

However, stock prices are in an uptrend over the long-term, driven by economic growth and monetary inflation. The fact that prices on average fail to rise in the first half of election years points to an elevated probability of price declines.

Thus there is a risk of a bumpy ride in stocks in the first six months of 2020! But what is the situation in other markets? Such as e.g. in the gold and currency markets?