“Sell in May”: Advisable, or Is There a Better Way?

If you “sell in May and go away”, you are definitely on the right side of the trend from a statistical perspective: While gains were achieved in the summer months in three of the eleven largest stock markets in the world, they amounted to less than one percent on average. In six countries stocks even exhibited losses! Only in two countries would an investment represent an interesting proposition, as I have shown in the last issue of Seasonal Insights via back-test calculations for the time period 1970 to today.

But does it really make sense to sell at the beginning of May and buy one's position back again after six months? After all, it seems a bit strange to assume that stock market behavior will adhere precisely to a time period of six months.

Below we will take a look at how one can improve investment results in this context by applying a modified set of rules.

“Sell in May” in Germany's DAX Index

As an example, I have picked the German Dax Index, which is one of the bigger losers during the six summer months. The chart below shows its seasonal pattern in the course of a year. The horizontal axis shows the time of the year, the vertical axis depicts the 30-year seasonal index since 1987.

DAX, Seasonal Pattern, Calculated over a Time Span of 30 Years 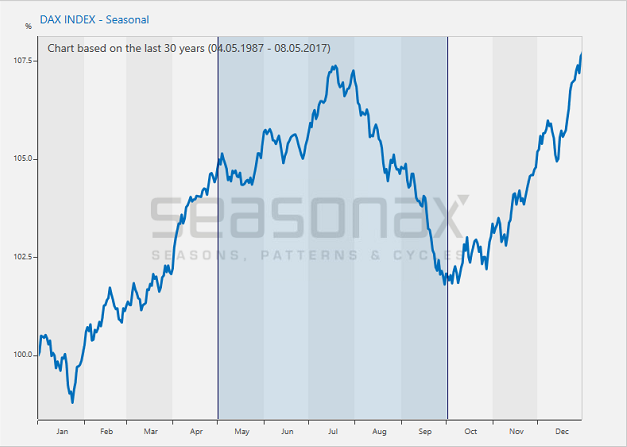 After May 1, the index continues to rise until it peaks in mid-July. Source: Seasonax

The six summer months are highlighted in blue. According to the “Sell in May” rule one should not be invested in this time period.

As a matter of fact, the seasonal index does stand at a lower level in early October than at the beginning of May –thus, following the “Sell in May” rule would have been profitable. The seasonal chart confirms the back-test calculation presented in the last issue of Seasonal Insights, which arrived at the same conclusion.

However, one can also see that the DAX actually reaches its seasonal peak in mid-July. It would therefore have been better to sell at a later point in time.

Let us look a bit more closely at what is actually the weakest seasonal phase in the DAX. The next chart once again shows the 30-year seasonal pattern of the DAX, but this time only the weakest part of the pattern is highlighted, instead of the six summer months.

DAX, Seasonal Pattern, Calculated over a Time Span of 30 Years 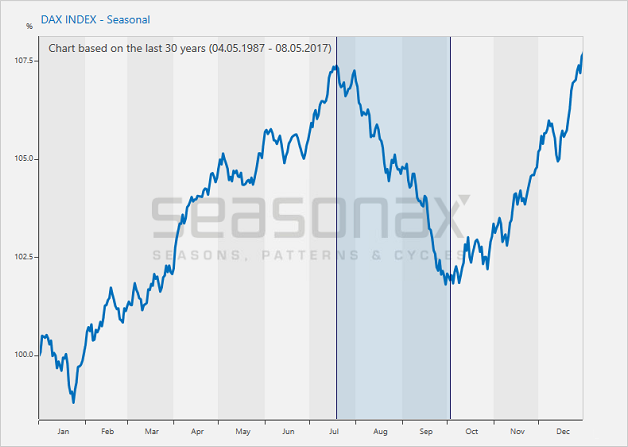 The seasonally weakest trend begins precisely on July 19 and ends on October 02. The average loss generated by the DAX in this time period amounted to 5.18 percent.

By contrast, the loss over the entire six-month period according to the “Sell in May” rule only amounted to 3.75% on average. Ultimately, it was worthwhile to remain invested for longer.

The DAX Declined Only Every Other Time – but Often Quite Dramatically

But was did it always make sense to sell? The bar chart below shows the return generated by the DAX in the time period July 19 – October 02 in every year since 1987. Red bars indicate losses, green bars indicate gains.

The surprising result: the DAX actually declined in only mind bogglingly half of all cases in the seasonally weakest period, i.e., on 15 occasions. However, the losses were at times mindbogglingly large, amounting to up to 35.79 percent, as the conspicuous red bars illustrate.

In other words, when it did decline, it often did so dramatically, saddling investor with quite painful losses. While there was a similar frequency of gains, they were far weaker by comparison.

By the way, you can look at the charts of the remaining countries at www.seasonalcharts.com free of charge, or if you have access to a Bloomberg Terminal or Thomson Reuters Eikon, via the Seasonax App.