Trump or Seasonality: Which One is Going to Prevail in the Dollar‘s Late Year Surge

The US faces uncertain economic times, as Trump and Xi Jinping are still locked in a bitter trade dispute that is likely to go on for some time, creating uncertainty for the future of trade between the world’s two biggest economic powerhouses. On the other side of the Atlantic, Brexit is still not off table and has proved to be an endless saga which has been in the media’s spotlight for almost two and a half years now. On top of that, Italy’s budget drama is making the ground shaky, as are the newest confrontations between Putin’s Russia and the Ukrainians. Nonetheless, even in the current circumstances, the USD is still rallying strongly, so what can we make of this development? Will the US dollar continue to appreciate, or will its seasonal pattern of year end decline prevail?

The chart below depicts the seasonal trend of the euro relative to the US dollar. It is not the type of price chart one usually encounters. Rather, the seasonal chart illustrates the average trend in the euro in the course of a year. The horizontal axis shows the time of the year, the vertical axis the average percentage move in in the exchange rate over the past 43 years. With that the euro’s seasonal trends can be discerned at a glance. 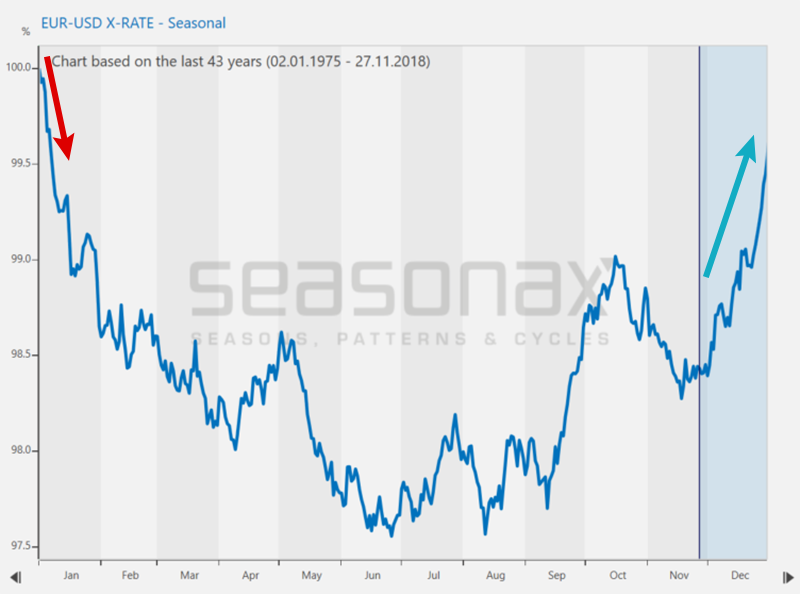 Euro vs. US dollar, seasonal trend over the past 43 Years
The euro is subject to a seasonal uptrend at the end of the year. Source: Seasonax

The period of seasonal strength in the euro at year-end is highlighted in blue. This phase begins on November 27 and ends on December 31. Thereafter the euro typically declines again. If you look closely at the chart, you will notice that the change in trend occurs precisely at the turn of the year. This is quite conspicuous and there has to be a reason for it – more on this further below.

The euro’s strength at year-end is no coincidence

The average gain in the seasonally strong period between November 27 and December 31 amounts to 1.24 percentage points – a sizable amount, as currencies tend to be far less volatile than e.g. stocks.The following bar chart shows the percentage moves in the exchange rate in the period November 27 – December 31 for every year since 1975. 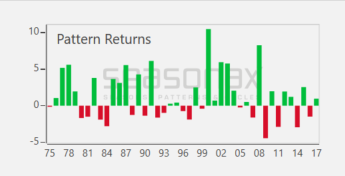 Euro in US dollar: percentage return between 11/27 and 12/31 for every year since 1975
The euro typically rallies at year-end. Source: Seasonax

The green bars indicate gains. They predominate both in terms of size and frequency. This makes clear that the euro’s seasonal rally at year-end is not generated by a handful of statistical outliers. What is the reason for the euro’s strength at this time of the year though?

The reason for the euro’s year-end rally

The fact that the euro turns down vs. the US dollar again, right at the turn of the year already hints at the cause of this seasonal pattern. It has to be directly linked to the calendar. And what happens at year-end? It is the balance sheet date!

The euro’s year-end rally inter alia has to do with US tax legislation. Many US companies are able to reduce their tax liability by understating certain financial figures as much as possible at the reporting date.

In this context it can be worthwhile to transfer funds to the accounts of foreign subsidiaries. The associated increase in demand for the euro naturally has an effect on its exchange rate. Therefore, the euro typically strengthens against the dollar at year-end. After the turn of the year, the tide immediately turns again as companies reverse these transfers of funds. The typical move in the euro’s exchange rate against the US dollar is therefore primarily a result of tax avoidance strategies of US companies. What is the effect on other currencies though? Find out more in our web-based application

Make Use of These Patterns!

With the help of our Seasonax Web App, you can examine these patterns – using nothing more than your browser. You can analyze more than 12,000 assets and find seasonal patterns of your own. We invite you to visit our app.seasonax.com and test out the patterns we offer for free. Don’t forget that there are no guarantees in the markets but you can let probabilities work in your favour!