US Election Cycle: Mid-Term Election Years Tend to be Weak From Now On!

As you know, Joe Biden was elected as the President of the United States in 2020. However, did you know that there is a typical four-year cycle that follows elections?

The course of the stock markets is not so much dependent on whether a Republican or Democrat becomes President. The election cycle - also known as the four-year cycle - does not differentiate according to party, but according to the year within the cycle.

Reasons for the presidential election cycle

Why are the two years after the election so weak, while the two years before the election are fairly good stock market years? The reasons are obvious: Presidents want to be re-elected, or want a successor from their Party. Before the election, therefore, they try to stimulate the economy and make voters feel positive. This includes measures financed by deficit spending. However, the central bank (which is not completely independent) also seems to support the incumbent President through its monetary policy.

The following chart represents the four-year cycle starting from 1900. It shows you the average four-year development of the Dow Jones over a hundred and twenty years. This also allows you to take a close look at developments within a year.

Mean trend of the Dow Jones in the four-year cycle dependent on the U.S. presidential election 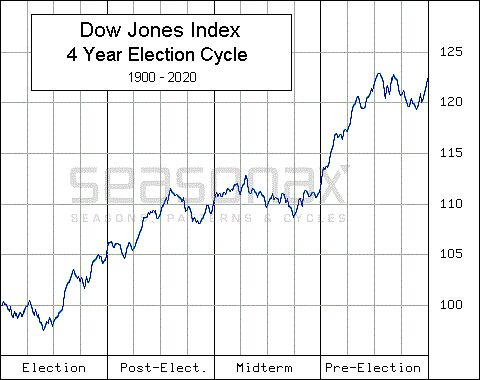 On the far left of the chart the “election” year,  and on the far right, the “pre-election” year, were good stock market years, as already mentioned. By contrast, the two middle years in the chart, i.e. the post-election year and the mid-term election year, hardly brought any gains for investors.

As we are currently in a mid-term election year, we will now focus our attention on the trend for the mid-term year.

The midterm election year under the microscope

The next chart shows you the average course of only the mid-term election years. In effect, it is the enlargement of the third quarter of the first chart.

From mid-April, prices tend to weaken.

You can clearly see a weakening from mid-April - an early "Sell in May and Go Away", so to speak. On the other hand, a rise occurs earlier, namely at the end of September, compared to the end of October as in a “normal” year. Overall, the mid-term election year shows a sideways trend.

There are also good opportunities in a mid-term election year!

individual stocks and sectors deviate from the index trend and offer you good opportunities even in difficult times. This shows you how important it is to consider seasonality at an individual stock level.

Take the challenge! Seasonax helps you find good investment opportunities. So stop by www.seasonax.com. You are very welcome!