Today we want to discuss a particularly simple and effective anomaly, albeit one that is marred by a small catch – more on this further below.

With the help of this particular anomaly you would have been able to beat the market over the past 90 years with just two trades per month – while being invested over a mere third of the time.

Most gains are generated around the turn of the month!

Take a look at the following chart. It shows the average pattern of the S&P 500 Index in the course of a month. The horizontal axis shows the time of the month, the vertical axis the return of the seasonal index.

S&P 500 index, seasonal pattern in the course of the average month over the past 90 years 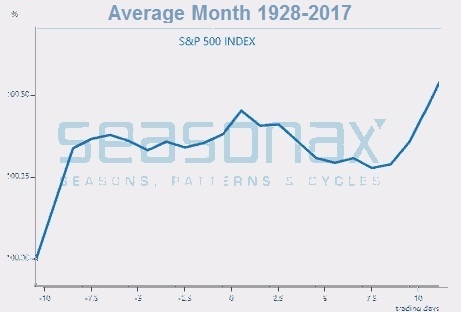 The market's gains are typically generated around the turn of the month.
Source: Seasonax

It is quite obvious that the market's gains are typically generated around the turn of the month. The remaining time period is even characterized by producing losses on average.

How big was the return that could have been achieved?

Gains around the turn of the month were quite significant!

The next chart shows the capital gains delivered by the S&P 500 Index since 1928, in relation to the days of the month during which a position was held. 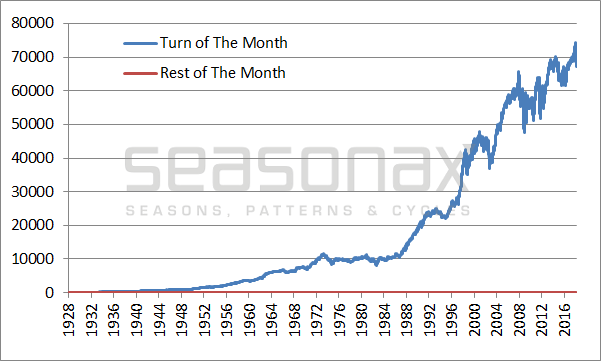 The returns gernerated around the turn of the month were exeptionally large!
Source: Seasonax

This phenomenon is aptly named the “turn-of-the-month effect”. It is tied to payment streams around the end of the month, such as salary payments and retirement plan contributions. How stable is this effect over time?

The effect comes and goes – and then comes back again!

This is illustrated by another cumulative return chart, this time in the form of a semi-log chart starting from 1950. 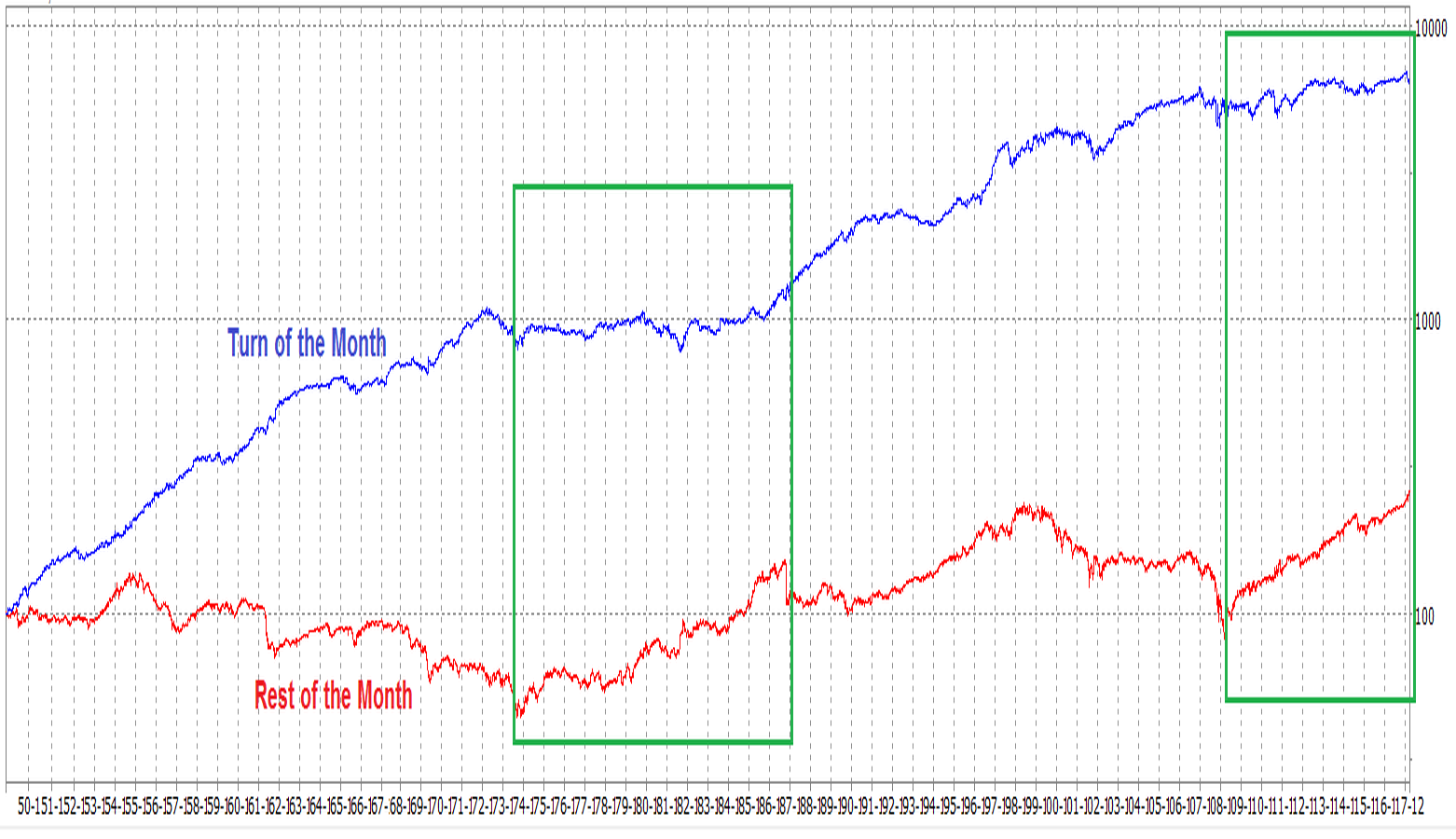 A closer look at the details reveals that there are also lengthy time periods where the pattern fails to fall in line with the long term average.
Source: Seasonax

This chart illustrates clearly when the “turn-of-the-month” effect was particularly strong, and when it hasn't worked at all.

It worked especially well from the mid-1950s until the early 1970s and then again from the turn of the millennium until 2008. In these time periods stocks tended to rise strongly around the turn of the month, while actually falling  quite noticeably over the rest of the time.

The worst showing of the effect was in the time periods marked by the green boxes on the chart. The first time it happened in the years prior to the crash of 1987, and the second time in recent years.

Could it be that this is a bad omen, warning us that another crash lies ahead?

Perhaps.
However, at this juncture my main aim is not to find out whether the recent absence of the effect has a signaling function, or how well it works in what time periods. My aim is rather to let you know how to best deal with the phenomenon of anomalies that come and go, only to come back again at a later stage.

Take advantage of as many different statistical anomalies as possible!

The example shows that individual statistical market anomalies don't necessarily occur with sufficient regularity to make it possible to use them without encountering problems. However, whether you are a trader, an investor or a dealer, there are many other statistical market anomalies you can take advantage of. To review them, either visit my  free-of-charge web site www.seasonalcharts.com or call up the Seasonax app on Bloomberg or Thomson-Reuters. By taking advantage of many different recurring market anomalies you will boost the probability of achieving strong returns through the diversification effect, which applies not only to financial instruments as such, but also to strategies and statistical anomalies. Moreover, you should try to be among the first market participants who exploit specific anomalies – before too many people join the bandwagon and potentially cancel their effects out.