Is Historically Low Volatility About to Expand?

You have probably noticed it already: stock market volatility has recently all but disappeared.

This raises an important question for every investor: Has the market established a permanent plateau of low volatility, or is the current period of low volatility just the calm before the storm?

When such questions regarding future market trends arise, it is often worthwhile to examine market history.

For the purpose of analyzing volatility I have used one of the longest time series available, namely the Dow Jones Industrial Average (DJIA) from 1915 onward – which represents more than a century of price history. In order to improve comparability, I have removed Saturdays, which used to be trading days in the distant past. I have calculated historical volatility as rolling and overlapping time periods of 21 trading days (equal to approximately one calendar month).

On August 7 volatility measured in this way had declined to just 3.99 percent, which is a very low level indeed.

By way of comparison, over the entire period of 25,734 days, volatility amounted to 15.05 percent on average!

The chart below shows the rolling 21-day volatility of the DJIA since 1915: 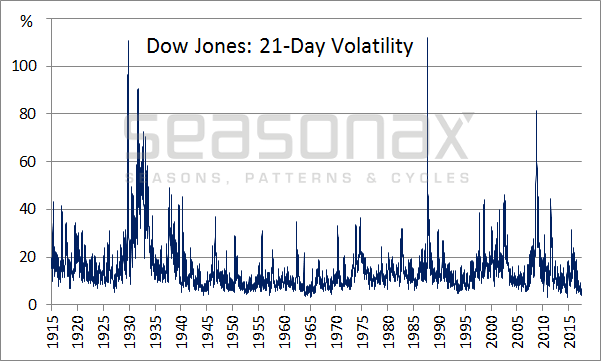 Volatility can reach much higher levels!

Levels of volatility as low as they are currently nevertheless are very rare occurrences. Over the past century levels below 4 percent were recorded in just 0.17 percent of all cases.

Conversely, the upside potential is considerable. To merely revert to the long-term mean of 15.05 percent would require more than a tripling from current levels.

The next chart illustrates the distribution of 21-day volatility levels of four percent and higher in the DJIA from 1915 to 2017 in increments of one percentage point. 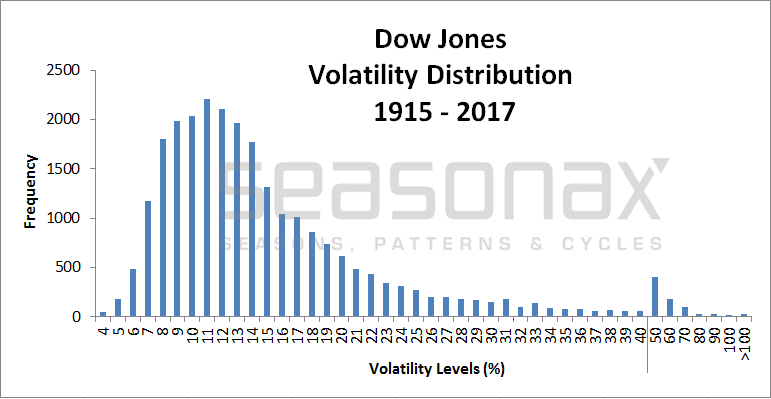 There is substantial potential for volatility to expand. Source: Seasonax

Once again it can be seen quite clearly how extraordinarily extreme volatility levels below 4 percent are.

Volatility in the course of the year

When should a surge in volatility be expected though? In order to find this out, we will examine the seasonal pattern.

The next chart shows the seasonal trends in the 21-day volatility of the DJIA over the entire time period under investigation from 1915 onward.

Volatility of the Dow Jones Industrial Average, seasonal pattern, 1915 to 2017 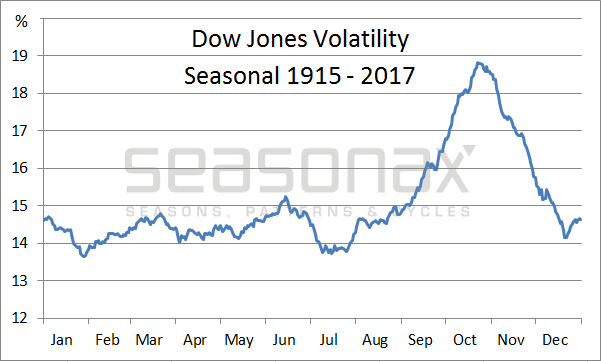 A peak in price volatility is typically reached in October. Source: Seasonax

Despite the very long-time period under examination with its multitude of data points, there evidently exists a very distinct seasonal pattern in stock market volatility.

In July, the proverbial summer doldrums can be observed, with volatility levels averaging less than 14 percent. Thereafter volatility typically increases to a peak of almost 19 percent in October.

Low volatility is not going to persist forever!

Many investors are currently betting on a further decline in volatility. In view of its already very low level and the negligible additional downside potential it offers relative to the substantial upside potential, this is probably not the best idea ever. Moreover, as shown above, October is the month in which volatility typically reaches a seasonal peak. Taking both of these facts into account, it seems far more sensible to expect an expansion in volatility.