October: the Most Dangerous Month

Although the month of October without outliers like the crashes of 1987 and 2008 delivers an acceptable performance in seasonal terms, these particularly strong declines in such short time periods are nevertheless scary: what use is it to anyone if the market performs well in October a number of times, but then generates such large one-off losses that all previous gains evaporate? And what about intermittent losses?

October is the most dangerous month

The 20 largest one-day declines in the DJIA 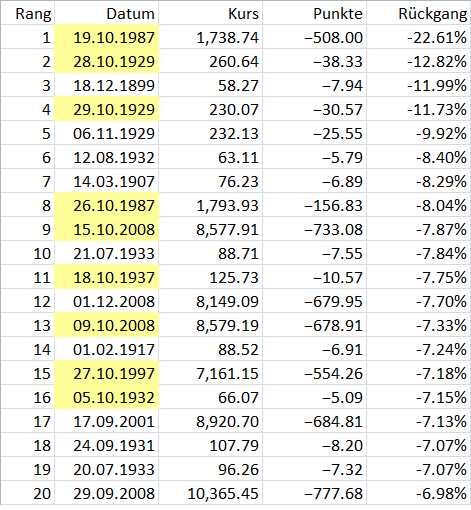 9 of the 20 strongest declines occurred in October. That is an extremely disproportionate frequency. Thus, October has a tendency to surprise stock market investors negatively – in the form of sudden price plunges.

Outliers are real too

Things look quite differently in the first half of the year. Only two of the 20 largest declines have taken place in these six months.

As investors we must not let ourselves be deceived. Even though extreme price declines are rare, they can exhibit seasonal tendencies as well.

This means that while gains rather than losses may well be generated in most years, the losses frequently turn out to be exceptionally large.

Thus, while October is characterized by frequent large price declines, it is at the same time actually not a weak month overall.

In order to illustrate this, a seasonal chart of the DJIA over a very long time period is shown below. Contrary to normal price charts a seasonal chart doesn’t depict actual prices over a specific time period. It rather shows average prices over many years in relation to the time of the year. In the case shown below, the average price pattern over 116 years has been calculated for this purpose. The horizontal axis depicts the time of the year, the vertical axis shows price information. 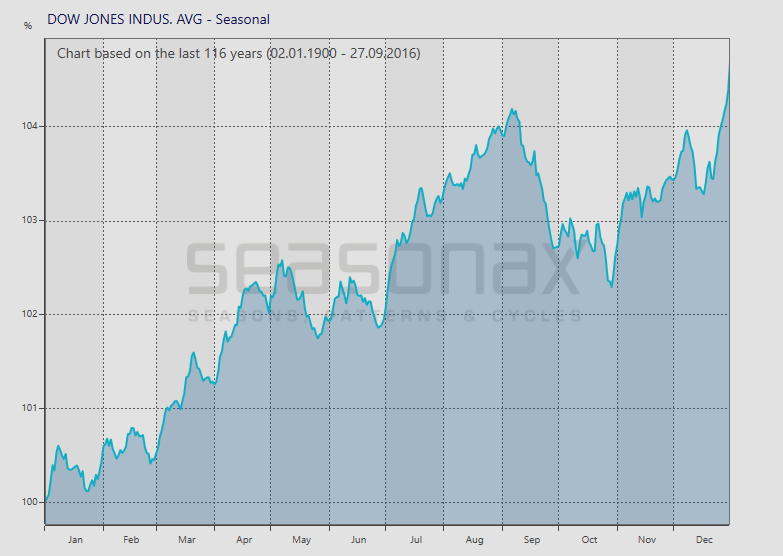 On average the market moves sideways in October. Source: Seasonax

The chart shows the typical seasonal behavior of prices. As you can see, the weakest month is actually September rather than October. Over the latter, the market moves sideways overall. It even exhibits a very small gain, if a below average one. Nevertheless, on average October delivers a better performance than its reputation among stock market participants would suggest. This reputation in turn stems from particularly large short term declines, which actually do frequently occur in October.