Trump or Seasonality: Which One is Going to Prevail in the Dollar's Late Year Surge?

Numerous strong markets moves were triggered in the wake of the US election outcome, including a rally in the US dollar.

The chart below depicts the seasonal trend of the euro relative to the US dollar. This seasonal chart illustrates the average trend in the euro in the course of a year over the past 41 years.

Euro vs. US dollar, seasonal trend over the past 41 years 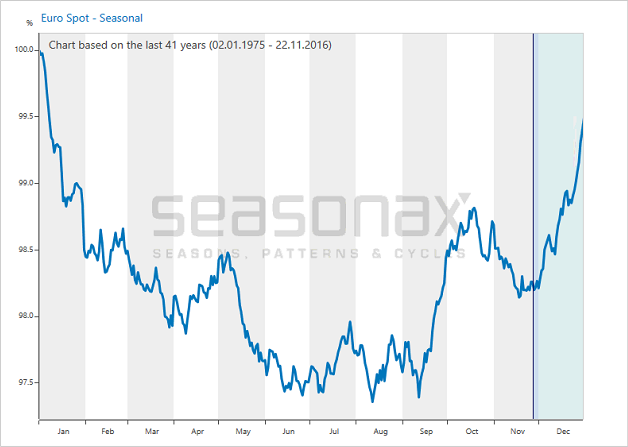 The euro is subject to a seasonal uptrend at the end of the year. Source: Seasonax

The period of seasonal strength in the euro at year-end is highlighted in blue. It begins on November 27 and ends on December 31.

Thereafter the euro typically declines again. A close look at the chart reveals that the trend change occurs precisely at the turn of the year, which is quite conspicuous.

The euro's strength at year-end is no coincidence

The average gain in the seasonally strong period between November 27 and December 31 amounts to 1.33 percentage points – quite a sizable amount, considering the comparatively low volatility of major currency pairs.

The bar chart below shows the percentage moves in the exchange rate in the period November 27 – December 31 for every year since 1975.

Gains predominate both in terms of size and frequency. Evidently the euro's seasonal strength at year-end is not due to statistical outliers. What actually causes the euro to be firm at this time of the year though?

The reason for the euro's year-end rally

The fact that the euro turns down again vs. the US dollar right at the turn of the year already hints at the cause of this seasonal pattern. It is evidently influenced by the end of the financial year.

Many US companies are able to reduce their tax liability by understating certain financial figures at the balance sheet date. It can be worthwhile to temporarily transfer funds to foreign subsidiaries.

The associated increase in demand for the euro naturally affects its exchange rate. Thus the euro typically strengthens against the dollar at year-end. After the turn of the year, companies immediately reverse these transfers again.

In short, the euro's typical year-end rally is primarily the result of tax avoidance strategies of US companies.

Taking advantage of such regular and logically consistent seasonal patterns in exchange rates can be quite profitable over time.

In order to access the Seasonax app, either type “APPS SEASON” into your Bloomberg Professional Terminal, or select the App Studio in the Thomson Reuters menu. The Seasonax App can be launched from there.