Will the Nikkei Win the Next Olympic Games?

On 24 July 2020 the Olympic Summer Games will begin in Tokyo, the capital of Japan. In addition to the Olympics, Soccer World Cups are among the largest sporting events in the world.

Are you also among the people who think these events may have an effect  on local stock markets? Let us examine whether and in what way such major sporting events impact the stock markets of host countries.

Recently the performance of Japan's Nikkei 225 Index was not exactly convincing as the chart below indicates. Perhaps that is going to change soon? 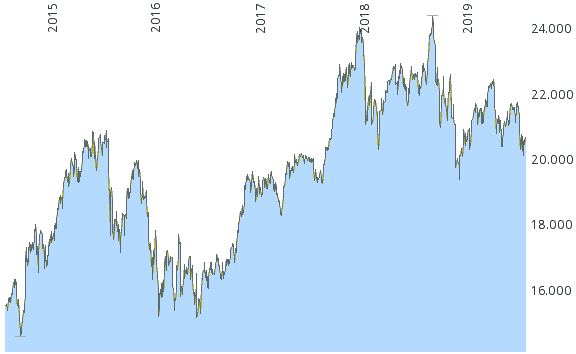 The Nikkei's performance over the past two years has been disappointing. Source: Comdirect

A large number of sporting events provides a comprehensive picture!

There have been 15 Olympic Games and 15 Soccer World Cups since 1960. For 22 out of the total of 30 sporting events daily stock prices of the host country markets are available. The 2002 Soccer World Cup was hosted by both South Korea and Japan, i.e., it took place in two countries. By using the stock prices of both host countries in this case, we can examine a total of 23 markets in our study.

The table below shows an overview of all Summer Olympic Games and Soccer World Cups since 1960. It also indicates whether the relevant stock prices are available. 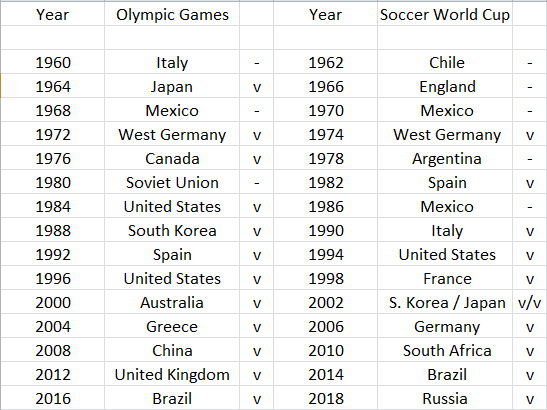 Only since 1988 are stock prices available in all cases. Source: author's own diagram

We are using US dollar-denominated country indexes, as some local currencies are quite volatile. In short, we adopt the perspective of an international investor.

To examine the impact of these major sporting events, we look at the trend of stock prices around the events. A specific temporal anchoring point is needed, as the events take place at different times of the year (between the end of May and the beginning of October). We use the beginning of the sporting events as the fixed point in time around which we perform the analysis.

In the next step, we average the returns generated by the individual indexes around this fixed point in time. In this way we can easily gauge whether a typical pattern around major sporting events exists.

A depiction of the average in the form of a special event chart permits us to discern the typical pattern of stock prices around major sporting events at a glance.

Stock prices rise for many months before the games begin!

Thus the next chart is not a standard stock index price chart. Rather, it depicts the average performance of the stock market indexes of all countries concerned. The vertical axis depicts the percentage by which the indexes rallied or declined on average. Time information is plotted on the horizontal axis.

In other words, the chart illustrates the average performance of the stock markets of all host countries around a major sporting event over a time period of two years.

Average performance of the stock markets of countries hosting major sporting events, one year before and one year after the event, 1960 - 2018 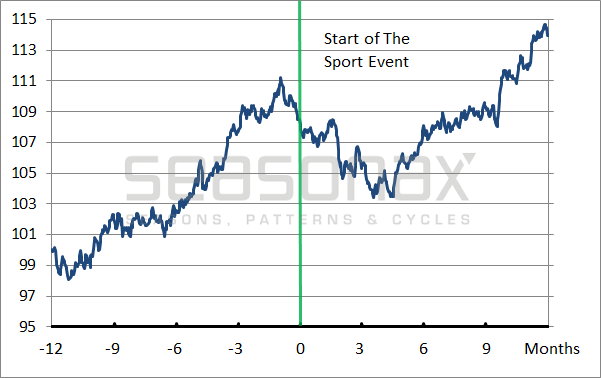 However, roughly one month before the beginning of the major sporting event the market entered a strong downtrend that lasted almost half a year. Even during the competitions stocks tended to decline, if only moderately. Prices only began to recover again several months later.

The extent of the average gain from the market low 11 months before to the peak one month before the beginning of the sporting event amounted to 13.39 percent, or 15.78% annualized.

By comparison, the annualized gain of the MSCI World Index between 1970 and 2018 was just 6.35%. Thus the “pre-Olympics phase” generates roughly a doubling of this return in the local stock markets of the countries hosting the sporting event!

A number of reasons suggest themselves for the strong rallies ahead of such events: major sporting events spur a flurry of public spending. Moreover, they attract a great deal of media coverage. This in turn attracts investors as well.

However, by the time sports coverage dominates the media close to the beginning of these events, it is already too late. This demonstrates how important it is to be well-informed – which you will be with the help of our tools at app.seasonax.com or at Bloomberg and Thomson-Reuters.