A Nasty Hangover after the German Parliamentary Election?

You may have heard of the so-called election cycle. This cycle, which is popular in the US, impacts stock markets for four years in a statistically significant way.

Does anything similar exist in other countries? In Germany, elections for the Bundestag - Germany's parliament - will be held soon, on 26 September. Thus I would like to answer this question for you today with respect to the German market.

The American election cycle is characterized by a high degree of stability. It can be traced statistically as far back as the nineteenth century. The Dow Jones has rallied most in pre-election or election years. In the other two years, stocks have on average achieved much smaller gains. Which party is elected is immaterial for this cycle.

The reasons for this cyclical price behavior are held to be political: Presidents want to be re-elected or want their successor to be a member of their party. For this reason, they attempt to stimulate the economy before the election to make voters feel positive. Unpopular measures are preferably implemented after the election.

You can find out what the election cycle looks like in detail in the Seasonax app. Call up the filter function there and then the associated years of the election cycle. There one can also see the impact of US elections on other instruments such as gold or the US dollar. But how do the federal elections in Germany affect stock prices?

Unlike US elections, parliamentary elections in Germany are not held strictly in a four-year cycle at precisely the same time of the year. The election has been repeatedly brought forward such as e.g. in 1990. Therefore, the behavior of stock prices in Germany has to be examined using a special approach.

For this purpose, I have constructed a chart that shows the average pattern of the Dax (or of corresponding precursor indexes) around the day of the election.

The chart encompasses a period of six months, i.e. from three months before the election to three months after the election. The horizontal scale shows information related to dates (in trading days).

The vertical scale shows the extent of the move in percentage points.

Prices are available for fifteen federal elections. The day of the election itself is pinpointed by the orange-colored vertical line in the middle of the chart. 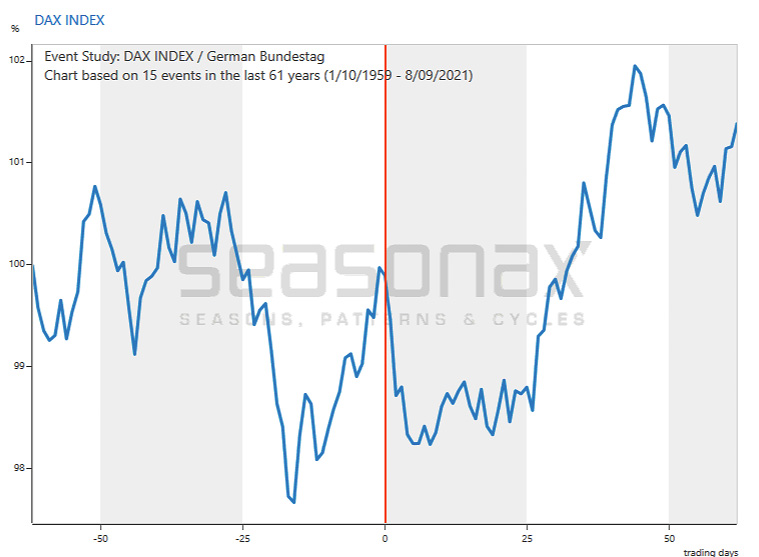 After the election the index declines rapidly. Source: Seasonax

Before and after the election

In the one to two weeks leading up to the election, a significant rally is evident as election day approaches. The reason for this is probably that optimism is beginning to take hold: suspense increases and with it the hope that the election will bring about a turn for the better.

A few weeks after the election, share prices rise again. But this is no longer driven by the election. Rather, the seasonal effect of the impending autumn rally is likely to kick in here, as most elections have been held at the end of September or the beginning of October.

Nevertheless, the rally in the days prior to the Bundestag election and the rapid decline in the days thereafter clearly form an election pattern. This can also be determined due to the fact that prices are turning down precisely after the election weekend.

Don't leave the party too late!