Every year a certain stock market phenomenon is said to recur, anticipated with excitement by investors: the so-called Santa Claus rally. It is held that stock prices typically rise quite frequently and particularly strongly just before the turn of the year.

I want to show you the Santa Claus rally using the Dow Jones Industrial Average (DJIA) as an example. The DJIA has a very long history and is therefore particularly useful for conducting a long-term analysis.

The chart below is not a standard chart that depicts a price trend over a specific time period. Rather, this seasonal chart shows the typical seasonal pattern of the DJIA. Specifically, it illustrates the average returns generated by the index in the course of a calendar year over the past 119 years. The horizontal axis shows the time of the year, the vertical axis shows the price information indexed to 100.

DJIA, seasonal pattern over the past 119 years 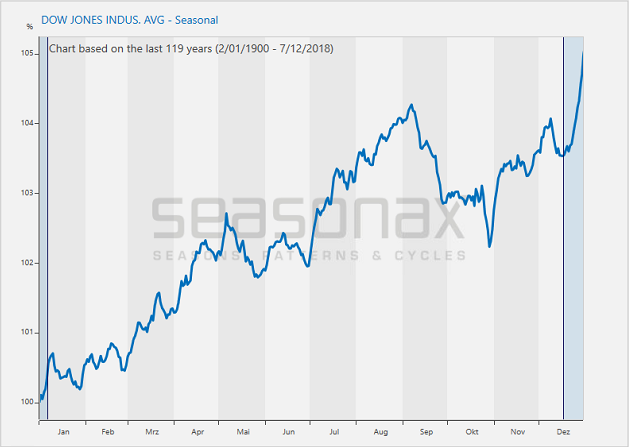 Due to the very long time period under review, the chart is an excellent reflection of seasonal trends that are stable in the long term – random patterns are pushed into the background.

The positive seasonal time period at the end of the year is highlighted in dark blue on the chart. The Santa Claus rally starts on December 17 and typically lasts until January 6 of the following year.

For comparison: in the rest of the time the annualized gain of the DJIA amounted to a mere 3.21 percent.

In short, the seasonal trend around the Christmas holidays is quite extraordinary.

One often cited reason for the stock market rally at the end of the year is window dressing by investment funds – i.e., investment funds support prices at year-end in order to prettify their results – which has the purely coincidental side-effect of boosting bonus payments, which are often calculated and paid at the turn of the year. Psychological reasons are likely to play a part as well, as the positive holiday mood and the strong desire to buy things (such as Christmas presents) spill over into stock markets.

HOWEVER: prices can decline as well!

Is a decline in stock prices possible in this traditionally positive environment? To find out one must take a close look at the results recorded in individual years.

The following bar chart illustrates the pattern returns for the time period Dec. 17 to Jan. 06 for all years since 1900. Green bars indicate gains, red bars losses.

DJIA, percentage return achieved between 17 Dec. and 06 Jan in individual years since 1900

In most years the DJIA rallies at the end of the year. Source: Seasonax

Will the shenanigans of Trump and Xi outweigh the Santa Claus effect?

However, these cases demonstrate that declines are definitely possible as well. Seasonal statistics can be very helpful in boosting the probability of achieving positive investment returns, but there are also other factors impacting prices. Rising interest rates, the break of important support trendlines and the recent escalation in the trade dispute between the US and China could well put additional pressure on stock prices in coming days.

In other words, there is a risk that US president Trump and his Chinese counterpart Xi Jinping could overwhelm Santa's influence this year. That should not discourage you from looking at seasonal trends. Seasonality does not lay claim to being correct in every instance; it rather is a method for the analysis of probabilities. As an aside, a number of other instruments, in particular currencies, also exhibit noteworthy seasonal trends at the end of the year. Simply navigate to app.seasonax.com to find out more.

There is never a guarantee in the markets, and that also holds for seasonal patterns – but you can definitely let probabilities work in your favor!