How Do Stock Prices React to Rate Cuts by the Fed?

“This is the greatest economy in the history of our country”, Donald Trump opined just a few months ago. Alas, recently there is growing evidence of an economic slowdown.

The Fed has an effect on stock prices!

The effect of rate cuts can be examined with the help of the Seasonax app. Its charting tool provides the quickest way of studying the impact of exogenous factors on all kinds of asset prices.

The chart shows the average move of the S&P 500 Index in the 140 days before and after US rate cuts were implemented. The average was calculated over the past 30 years, in which rates were altogether lowered 46 times. The horizontal scale shows the number of days before and after the event, the vertical scale the average price change in percent. The time of the rate cut is highlighted in orange in the middle of the chart. 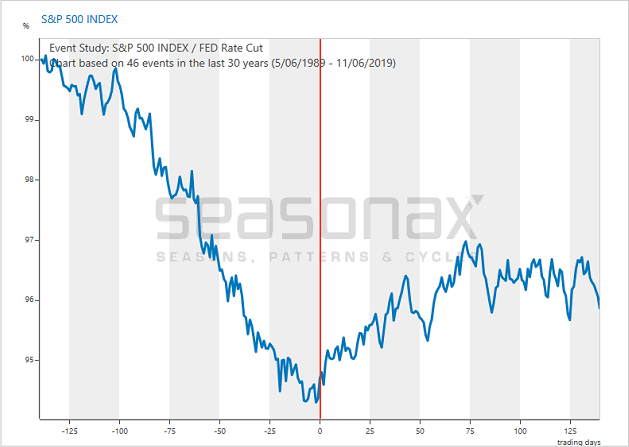 It can be seen right away that stocks typically decline in the months preceding rate cuts, but turn around immediately thereafter. Then they tend to rise moderately for approximately two and half months before the recovery is interrupted again.

In short, Fed rate cuts have a significant effect on stock prices. Administered interest rates are typically lowered during bear markets, which explains why prices on average decline ahead of rate cuts. As soon as the Fed becomes active, it stabilizes prices for a while and a counter-trend move ensues.

The Fed's actions affect other markets as well!

In the past these counter-trend moves were on average definitely large enough to suggest that it would make sense to close out short positions and perhaps even venture into a small long position.

However, the Fed's actions not only affect stock markets, but many other markets as well. In the next issue of Seasonal InsightsI will therefore examine the Fed's influence on foreign exchange rates for you.

Moreover, there are of course a great many more events and cyclical factors that influence asset prices. You can easily find them yourself, either at app.seasonax.com, or with the aid of your Seasonax app on Bloomberg or Thomson-Reuters and thus become a pioneer in the search for little known, but potentially highly profitable financial interrelations.