The US central bank’s Federal Open Market Committee (FOMC) holds regular meetings, a total of eight times a year, and market participants look forward to their outcomes: will interest rates be lowered, will they be increased, are there hints at future interest rate changes?

But while most analysts pay attention to the outcome of FOMC meetings, the meeting itself is actually the decisive factor.

Studies show: the period before FOMC announcements is key to price development.

An award-winning study by former NY Fed economists David O Lucca and Emanuel Moench showed that share prices increase disproportionately during the 24 hours before an announcement, while the period following an announcement is somewhat volatile and does not deliver strong gains.

Growth in the hours before the meeting is huge. In the words of economists, ‘we show that, since 1994, more than eighty per cent of the equity premium on US stocks has been earned over the twenty-four hours preceding scheduled Federal Open Market Committee (FOMC) announcements’.

This chart makes the facts clear. It shows the S&P 500 index level, along with an S&P 500 index that could have been obtained when all 2.00pm-to-2.00pm windows that occur immediately before scheduled FOMC announcements have been excluded from the sample returns windows.

The S&P 500 Index with and without the Twenty-four Hour Pre-FOMC Returns. 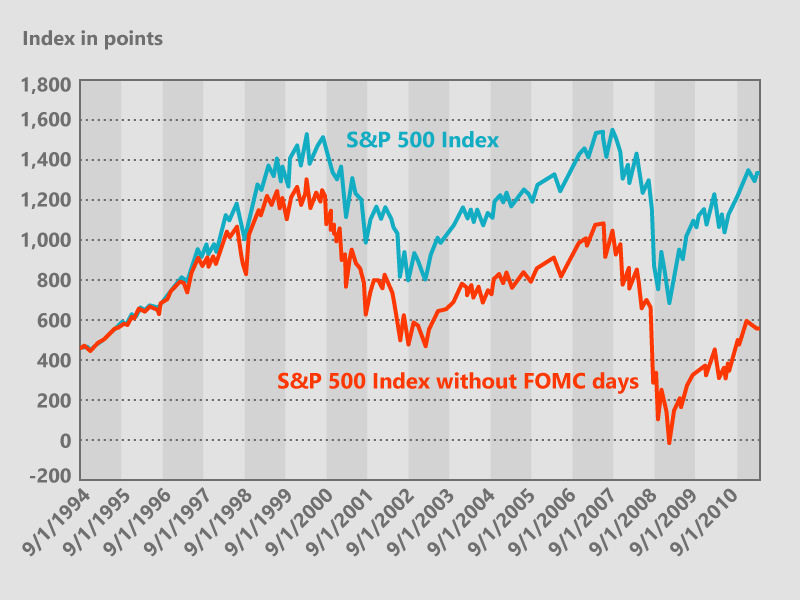 As you can see, if you exclude the hours before the announcements, there is almost no increase in the S&P 500. Conversely, these gains are almost entirely accountable within a period of just eight days!

This example shows you how important it is to have the right understanding and analysis of events.

But do FOMC announcements only influence share prices? What about currencies, the bond markets, or raw materials?

We investigated the influence of FOMC announcements on the euro-US dollar exchange rate; the chart shows the average development of the euro in the twenty days before and after FOMC announcements. The chart was calculated over the last fifteen years, during which the FOMC held a total of 120 normal meetings. The x-axis shows the number of days preceding and following the event, and the y-axis shows the average development in percentage terms.

The average development of the euro twenty days before and after FOMC announcements (2001 to 2016). 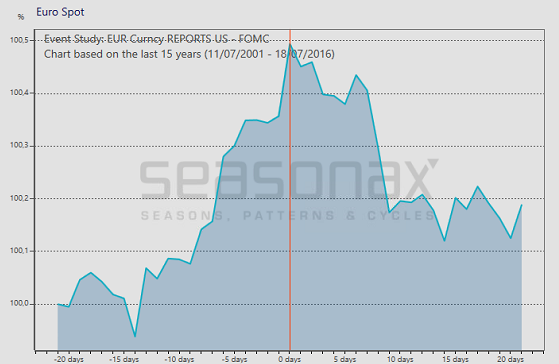 The euro clearly falls after the announcements. Source: Seasonax.

You can see at a glance that in the fourteen days preceding the announcements the euro typically grows, before falling over the same length of time following the announcements. It’s clear that boosting your awareness can boost your stock market profits.

Seasonax: Event analysis at the click of a button.

Release 2 of the Seasonax application is coming soon. Now it also includes a module for event studies, allowing you to quickly event-analyse all the tools that are available in Bloomberg or Thomson Reuters.

Chose from over thirty events that have been shown to be statistically valuable for investors - from economic data on public holidays to Futures Index leakage.

At a glance you can examine the influence that events have on your tools, and use this information as a filter or to inform your timing, by entering ‘APPS SEASON’ into your Bloomberg Professional Terminal, or by choosing the Seasonax app in Thomson Reuters.

Not convinced yet? Try Seasonax now within the 7 day free trial period on Bloomberg Professional under APPS SEASON!