How to Double Gains in Palladium with a Simple Trick

In past issues of Seasonal Insights I have discussed the very odd behavior of a variety of instruments in the course of a week: in issue 17 the topic was the S&P 500 Index, and in issue 18 the no less interesting intra-week pattern of Bitcoin.

In issue 22 I moved on to the “Strange Behavior of Gold Investors from Monday to Thursday”, which was followed by an examination of the pattern in silver a week later.

Several readers asked me whether a similar pattern could be observed in platinum and palladium. Is the action on Friday standing out in these metals as well, as it does in gold?

Let us take a closer look.

In platinum, Friday stands out!

Below I examine the average performance of platinum on individual days of the week.

The chart shows the annualized performance of platinum since 2000 in black, and that on individual days of the week in blue. 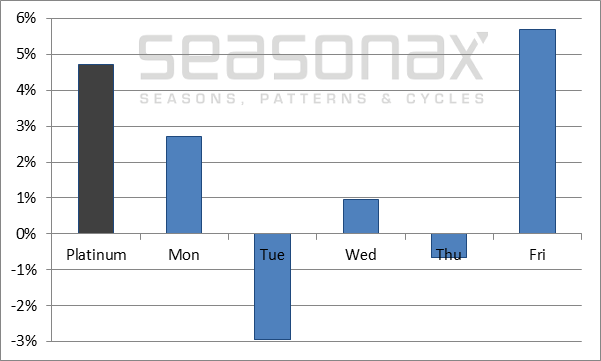 In Platinum the average performance on Fridays glitters even more than that of gold. Source: Seasonax

Just as is the case with gold, Friday is the strongest day for platinum as well. Its special status is even more pronounced: on average, platinum gained 5.68 percent annualized on Fridays, while its average weekly gain amounted to just 4.72 percent.

Thus investors who invested exclusively on Fridays, were able to book a larger profit than they would have made by holding a platinum position on every day of the week!

By contrast, the average performance on Tuesdays was particularly weak, with an average annualized loss of – 2.95 percent.

As an aside, the relatively close correlation between precious metals on individual days of the week is quite different from their annual seasonality. As you can easily ascertain either on www.seasonalcharts.com or with the help of the Seasonax App, the annual seasonal patterns in gold differ significantly from those of other precious metals.

How precisely did these patterns behave over time? The next chart shows the return of platinum since the turn of the millennium in gray and a breakdown of the cumulative return on individual days of the week in other colors; all are indexed to 100. 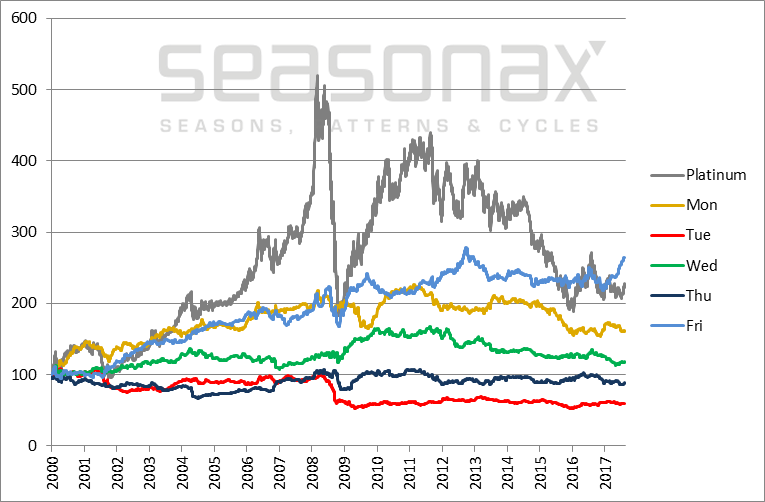 As you can see, the blue line depicting the cumulative gains on Fridays rose quite steadily over many years. In the bull market phase until 2008, Monday was also still able to keep pace.

The red line representing Tuesdays is particularly tragic. At first it went sideways over lengthy time periods, then it plummeted in 2008 and ever since, it is once again moving sideways.

Clearly one would have been best served by avoiding platinum investments on Tuesdays.

In palladium, even more extreme moves occur on Fridays!

How does palladium compare?

The next chart shows the annualized performance of palladium as such since the turn of the millennium in black, and that on individual days of the week in blue. 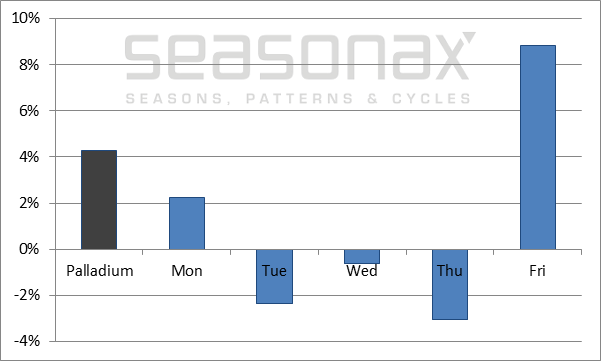 In Palladium, the average return generated on Fridays was especially outsized: at 8.83 percent it was more than doubled the average gain of 4.26 percent achieved over the entire week!

Investors who were exclusively long the metal on Fridays thus achieved double the profit they could have booked by being invested on all days of the week – Fridays included!

With the exception of Monday, the remaining days on average generated losses.

The weekly pattern of palladium under the magnifying glass 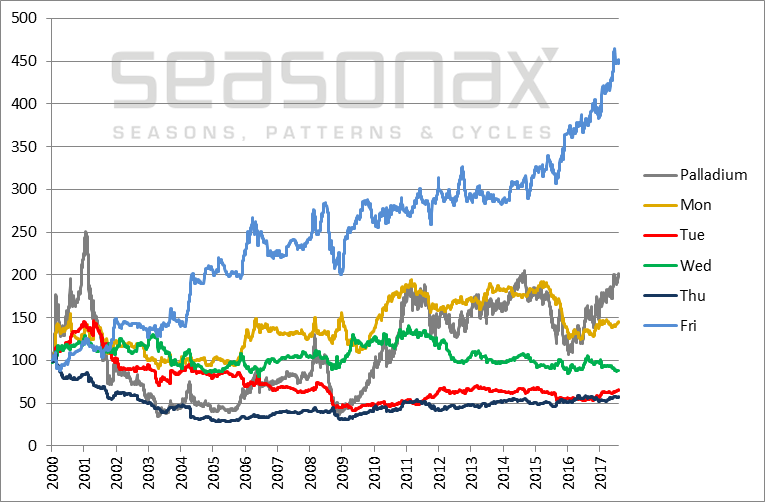 On Fridays, palladium was shining brightly as an investment! Source: Seasonax

While palladium itself rose quite a bit since 2000 amid rather heavy volatility, its cumulative return on Fridays alone was significantly larger and involved markedly smaller fluctuations to boot!

What more could anyone wish for from an investment?

Take advantage of statistical anomalies in precious metals and other instruments!

As the study clearly shows: statistical anomalies regarding the performance on specific days of the week are quite pronounced in precious metals as well. As a trader, investor or dealer, you can exploit these and many other similar anomalies.

You can either visit my free-of-charge web site www.seasonalcharts.com or call up the Seasonax App on Bloomberg or Thomson Reuters.

There are never any guarantees in the markets, but you can let the probabilities work in your favor.