Sell in May: Which country is now threatened by the biggest price decline?sell-in-may-which-country-is-now-threatened-by-the-biggest-price-decline

You are presumably aware of the saying "sell in May and go away". This popular seasonal stock market saying conveys that the stock market tends to underperform in the six summer months compared to the six winter months.

But is this indeed the case? And what is the international situation? Is the typical period of weakness in the summer months only seen in US markets, or does it exist in other countries as well?

The precise seasonal pattern of the S&P 500 Index

Let us first examine the seasonality of the US stock market. To do so, let us look at the annual seasonal pattern of the S&P 500 Index.

This is not a standard price chart. Rather, the seasonal chart depicts the average performance of the S&P 500 Index in the course of a calendar year. The horizontal axis shows the time of year, the vertical axis shows the index average of the past 50 years. I have highlighted the summer half-year from May to October.

S&P 500 Index, seasonal pattern over the past 50 years 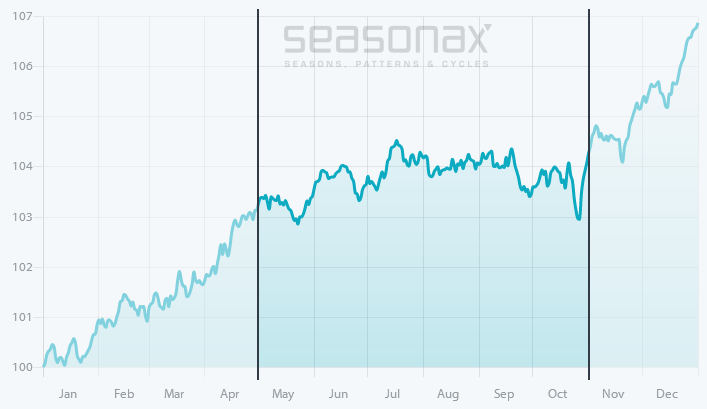 As the chart shows, advances in the S&P 500 Index in the summer half of the year between May and October are significantly weaker than in the rest of the time, i.e., the winter half. However, the absolute peak in prices is not in May as the saying suggests, but rather in July.

This illustrates how important precise seasonal analysis is. The saying "sell in May and go away" is helpful, but better results are possible.

What then is the situation in other countries? The following table shows the half-year results of the eleven largest stock markets by market capitalization. The half-year periods in which a risk-adjusted investment was worthwhile are highlighted in green. The loss-making six-month periods are highlighted in red. 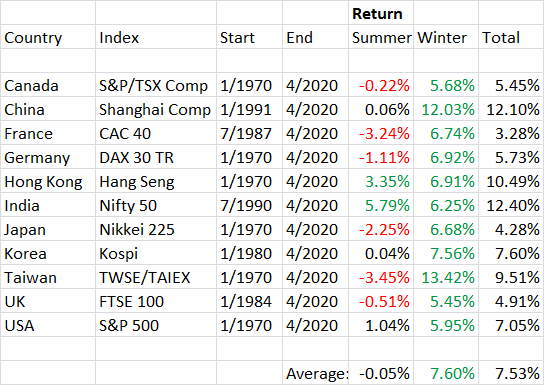 Only in two countries was it worthwhile to invest in the summer monthsSource: Seasonax

The table underscores that the seasonal weakness in the summer months - also known as the “Halloween effect” - indeed exists. In all countries the winter half-year was stronger than the summer half-year. In nine of the eleven countries the difference in returns was quite pronounced.

In two of the eleven countries, France and Taiwan, losses of more than three percent were recorded during the summer months.

Let us take a closer look at the seasonal pattern of one of the two negative record holders, France.

The precise seasonal pattern of the CAC 40

Below is a seasonal chart of the best-known French index, the CAC 40, which shows its typical pattern in the course of a calendar year over the past 32 years. The seasonal trends of the index can be discerned at a glance. I have once again highlighted the seasonally weak phase of the summer half-year.

CAC 40, seasonal pattern over the past 32 years 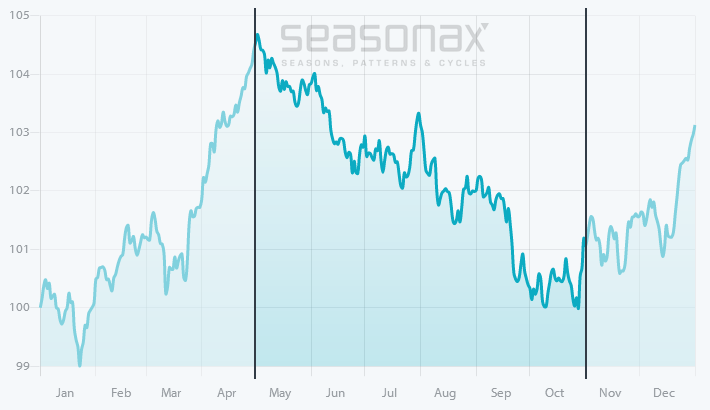 The performance of the CAC 40 during the summer months tends to be quite poor
Source: Seasonax (click here to analyze the pattern)

As the chart illustrates, the CAC 40 tends to post quite significant declines in the summer half-year between May and October. It is noteworthy that the decline actually does start at the beginning of May in this case. As an aside, this actually applies to many instruments, including a number of individual stocks listed in the US.

Be careful during the summer!

As shown above, the seasonal summer weakness known as the Halloween effect does in fact exist. It is actually a very simple and well-known rule. However, as we have also seen, it can be analyzed in much greater detail - down to the day. But when does the seasonal summer weakness in your favorite stocks begin? Are they even subject to it? If you would like to find out, give Seasonax a try!

“Sell in May” - the simplest rules are often the best! I also want to draw your attention to one of my recent webinars in German language "How You Can Benefit from Little Known Seasonal and Cyclical Patterns" where I also discussed "Sell in May".

Yours sincerely,
Dimitri Speck
Founder and head analyst of Seasonax