The Santa Claus Rally: A Myth or the Strongest Seasonal Advance of the Year?

The first chart below is not a standard chart that depicts price moves over a specific time period. Rather, the seasonal chart of the S&P 500 Index shows the typical seasonal pattern of the index in the course of a calendar year. In this case the chart represents the average returns generated by the index in the course of a year over the past 91 years, which is to say, an exceptionally long time period. The horizontal axis shows the time of the year, the vertical axis shows price information (indexed to 100).

S&P 500 Index, annual seasonal pattern over the past 91 years 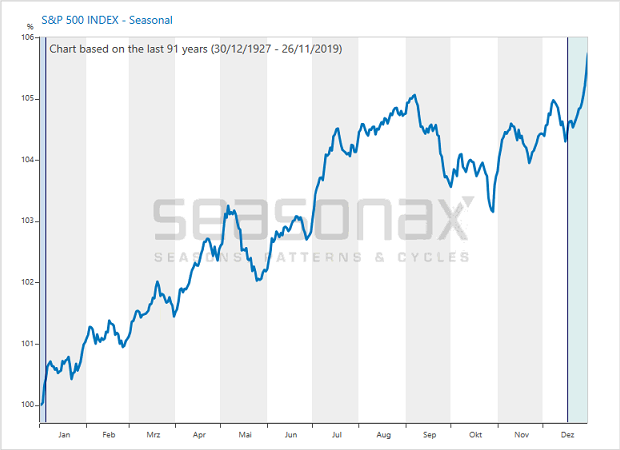 From a seasonal perspective the Santa Claus Rally is about to begin!

A disproportionately large gain in stock prices
The average return achieved in the time period from December 17 to January 04 over the past 91 years amounted to 1.82 percent. This gain was generated in just 17 calendar days.

Thus the Santa Claus Rally generated an annualized return of 47.41 percent on average!

For comparison: the average annualized gain of the S&P 500 Index in the rest of the time amounted to just 3.90 percent.

In short, the seasonal rally around the Christmas holidays is quite extraordinary.

Prices rose in 79.35% of all cases!
This raises the question whether this is a robust result or if it is a statistical artifact that can be attributed to a few outliers. To find out, let us take a close look at the pattern returns in individual years.

In most years the S&P 500 index advanced at the end of the year.

As the detailed breakdown illustrates, green bars clearly dominate both in frequency and extent. A Santa Claus Rally occurred in 73 of the past 91 years. By contrast, there were just 19 years in which a Santa Claus Rally failed to happen – including last year, as indicated by the small red bar on the right-hand side of the chart.

There are compelling reasons for the year-end rally in the stock market
One often cited reason for the stock market rally at the end of the year is window dressing by investment funds – in other words, investment funds are supporting prices at year-end in order to embellish their results – with the (purely coincidental but undoubtedly welcome) side-effect of boosting bonus payments, which are often calculated at the turn of the year.

However, less obvious, often psychological reasons are probably a more important factor. These include the fact that most people tend to take stock at the end of the year and position themselves for the new year. In addition, there is the statistically significant holiday effect, which demonstrably tends to lead to stock market rallies ahead of other holidays as well. During Christmas time the pronounced desire to buy things (such as presents) appears to be spilling over into the stock market as well.

Take advantage of seasonality and cycles!
As this demonstrates, seasonal clusters such as the Santa Claus Rally do indeed exist. What is particularly exciting from the perspective of investors is the fact that many other tradable instruments such as commodities and even individual stocks exhibit promising seasonal patterns as well – and often also at other times of the year.

If you want to learn about the seasonal trends in your favorite stocks or commodities, whether at the end of the year or during other time periods, you can do so with a few mouse clicks at app.seasonax.com.  If you are an institutional investor, you can alternatively call up the Seasonax app at Bloomberg or Thomson-Reuters Eikon.