The Santa Claus Rally is Especially Pronounced in the DAX!

Every year a certain stock market phenomenon is said to recur, anticipated with excitement by investors: the Santa Claus rally. It is held that stock prices typically rise quite frequently and particularly strongly just before the turn of the year.

I want to show you the Santa Claus rally in the German DAX Index as an example. Price moves are often exaggerated in the German stock market, which leads to quite pronounced – and hence profitable – seasonal trends.

The chart below is not a standard chart that depicts a price trend over a specific time period. Rather, this seasonal chart shows the typical seasonal pattern of the German DAX Index. It illustrates the average returns generated by the index in the course of a year over the past 20 years. The horizontal axis shows the time of the year, the vertical axis shows the price information indexed to 100.

DAX, seasonal pattern over the past 20 years 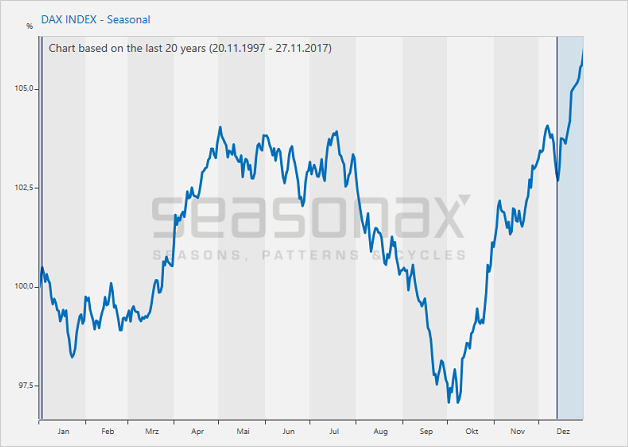 The positive seasonal period near the end of the year is highlighted in dark blue on the chart. The Santa Claus rally in the DAX Index begins on December 13 and typically lasts until January 02 of the next year.

A disproportionate gain in stock prices

The average return achieved in the time period from December 13 to January 02 amounted to 3.66 percent. This gain was generated in just 19 calendar days.

Thus the Santa Claus rally on average generated an annualized gain of 99.62 percent!

For comparison: in the rest of the time the annualized gain of the DAX amounted to just 1.86 percent.

In short, the seasonal trend around the Christmas holidays is quite extraordinary.

This raises the question whether this is a robust result or if it is a statistical artifact attributable to a few outliers. Let us take a closer look at the individual years underlying the pattern.

DAX, percentage return achieved between 13. Dec. and 02 Jan. in individual years since 1997

Most of the time the DAX rises at the end of the year. Source: Seasonax

As the breakdown illustrates, the green bars clearly dominate both in frequency and extent. The Santa Claus rally took place in 18 of the past 20 years, with the largest gain amounting to 16.13 percent (achieved in 1998). By contrast, there were just 2 years in which the Santa Claus rally failed to happen. The largest loss was recorded in 2000 and amounted to 4.99 percent.

One often cited reason for the stock market rally at the end of the year is window dressing by investment funds – i.e., investment funds support prices at year-end in order to prettify their results – which has the purely coincidental side-effect of boosting bonus payments, which are often calculated at the turn of the year.

Less obvious, often psychological reasons, are probably more a important factor though. These include the fact that people often take stock at the end of the year and position themselves for the new year. In addition, there is the statistically significant holiday effect, which demonstrably tends to lead to rallies on occasion of other holidays as well. During Christmas time the strong desire to buy things (such as presents) appears to be spilling over into the stock market as well.

Christmas is after all a time of giving. So perhaps it should be no surprise that the stock market is often rewarding investors generously at this time of the year.

The Santa Claus rally in other markets

If you want to find out how pronounced the Santa Claus rally in your favorite market instruments is, visit my free-of-charge website www.seasonalcharts.com or call up the Seasonax app on your Bloomberg terminal or in Thomson-Reuters Eikon. As an aside: there are never any guarantees in the markets, but you can certainly let the probabilities work in your favor!