What Happens With Bonds When the Fed Cuts Interest Rates?

Within nine months, yields on the 10-year treasury note have declined from 3.2% to 1.8%, once again approaching their all time lows.

The situation is even more extreme in other developed countries. On Friday 02 August 2019, the entire German yield curve was trading in negative territory for the first time. Even bonds with a 30 year term to maturity turned into a money-losing proposition for investors.

In view of this environment, the Fed has begun to cut administered interest rates. There is much to suggest - in particular a looming global recession - that further rate cuts are in store.

Hence you may be wondering: what typically happens to bond yields when the Fed cuts the federal funds rate?

We examine the effect of Fed rate cuts with the help of the Seasonax app; its charting tool offers the fastest way of studying the effects of exogenous drivers on all types of securities.

The chart below shows the average move in 10-year treasury yields in the 60 days before and after the Fed implements rate cuts. The average has been calculated over the past 30 years, a time period that encompasses a total of 46 rate cuts. The horizontal scale shows the number of days before and after the event, the vertical scale shows the average price move in percent. The day of the rate cut is highlighted in orange in the middle of the chart. 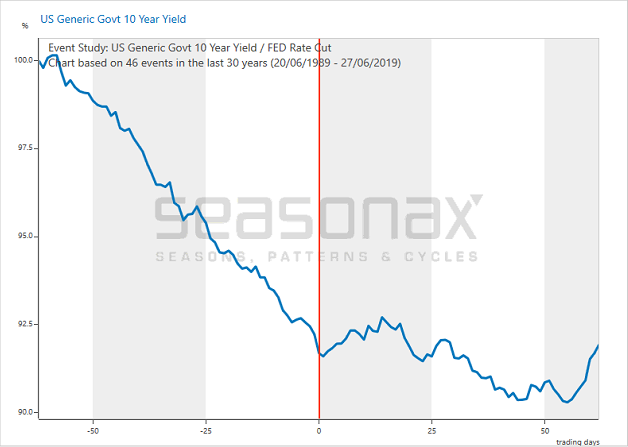 Average move in 10-year treasury yields in the 60 days before and after Fed rate cuts (1989 to 2019) Rate cuts have typically led to a stabilization of treasury yields!

It is obvious right away that treasury yields typically decline in the months leading up to a rate cut, but stabilize immediately thereafter;  then they enter a sideways trend.

Evidently, rate cuts have a significant effect on the trend in long term bond yields.

FOMC meetings not only impact bond markets, but many other markets as well. You can discover these and a great many other events and cyclical drivers affecting securities prices on your own, either at app.seasonax.com or with the help of your Seasonax app at Bloomberg or Thomson-Reuters.

The Seasonax app provides you with an opportunity to do pioneering work in the search for little known, but profitable correlations.