"Bad Stocks" – How to Invest During Bear Markets Part 2

Navigating the new market environment hasn’t been easy so far. Inflation, quantitative tightening, sudden spikes in rates and a pandemic have left their mark. But is there still a way to preserve capital and to identify trading opportunities?

In my previous Seasonal Insights, I tackled several sectors that are more likely to outperform the broad market during a recession. Now I want to add several more to this list.

The principle stays the same: when choosing the “right” stock, focus on quality. In other words, choose the companies that have a real competitive advantage, rock-solid balance sheets and are not overleveraged. Moreover, build your positions over time and remember that no one can predict exactly when the market is going to hit the bottom!

The stock market decline during the first half of the year was driven by the much faster than expected rise in interest rates by central banks. The question remains, will the decline continue during the second half, and will corporate earnings decrease under the recession pressure?

Demand for alcohol and tobacco is among the most inelastic of all. The addictive nature of nicotine means that smokers will still buy cigarettes or tobacco in a recession, even if it means switching to cheaper alternatives; and alcohol sales barely declined during the 2008 financial crash.

Stocks to consider from this sector include the largest tobacco companies such as British American Tobacco, Imperial Brands, Altria and Philip Morris.

Each of these stocks have their best entry and exit points during the year. These points can be found easily by using seasonal charts.

For example, Altria Group is the manufacturer of Marlboro, Parliament, and Virginia Slims.

Seasonal Chart of Altria Group over the past 10 years 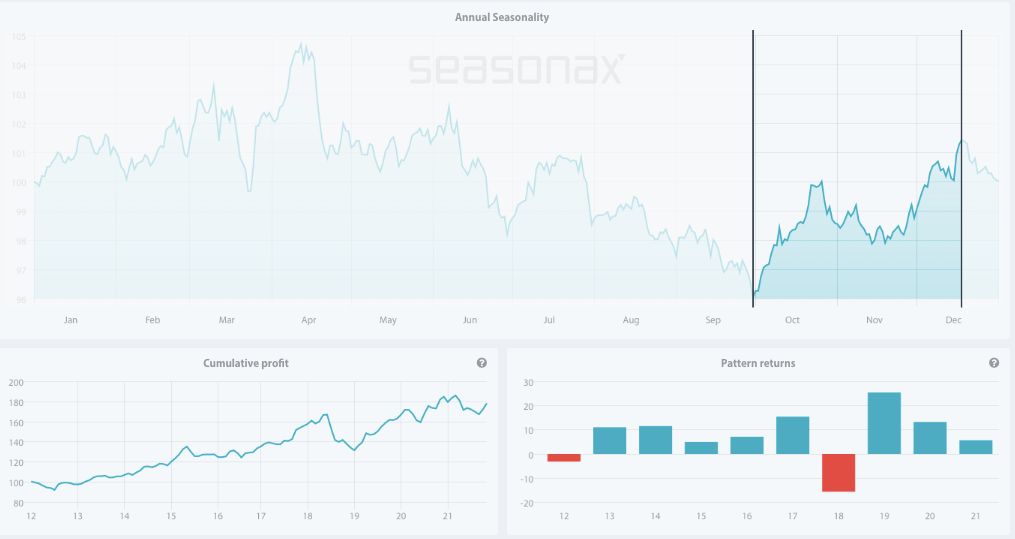 Keep in mind that a seasonal chart depicts the average price pattern of a stock in the course of a calendar year, calculated over several years (unlike a standard price chart that simply shows stock prices over a specific time period). The horizontal axis depicts the time of the year, while the vertical axis shows the level of the seasonal pattern (indexed to 100).

From the chart above, it is clearly visible that the end of September until mid-December, over the past 10 years, have been favourable months for this tobacco manufacturer. In this time span of 56 trading days (from September 30 until December 18), shares rose on average by 7.07%. Moreover, since 2012 the pattern returns had a winning strike of 80%, meaning that Altria Group generated gains in 8 out of the10 years during the selected time period.

If you consider investing in this stock, keep in mind that almost all of Altria's sales come from the United States, where smoking rates have steadily declined over past years. This has been the main reason that all tobacco manufacturers have taken steps to diversify away from traditional cigarettes.

For example, Altria took a 35% stake in e-cigarette manufacturer Juul Labs and a 45% stake in Canadian cannabis grower Cronos Group.

Alcohol stocks also tend to perform well during periods of economic downturn, meaning they can provide diversification and recession-resistance to a portfolio.

The leading alcohol companies that are making the most out of this are Constellation Brands, Diageo, Brown Forman, Ambev and Molson Coors.

All of these hold popular brands, which give them pricing power and strong cash flow, allowing them to pay dividends to shareholders.

A third “recession-proof” industry is military (defence) stocks. Defence stocks largely operate under long-term contracts with governments, who are unlikely to change their long-term spending on their country's defence due to a temporary recession. In 2022, defence stocks are still in the spotlight as the war in Ukraine has triggered high demand for weapons. Also, don’t forget all the companies that are dealing with cyber security, aerospace, and communication technologies.

Some of the stocks that you might consider are Lockheed Martin, General Dynamics, Textron and Leidos Holdings.

But still be aware of the timing of your investments. Each stock mentioned here has its strong and weak periods during the year, e.g Textron is worth considering after the September and October weakness.

When investing in defence stocks, time your investments wisely and occasionally take a look at the Pentagon homepage. Sounds familiar? Yes, if you were watching the famous movie “War Dogs”!

The Pentagon has a big appetite for new equipment, but there are limits to how much the government can buy. The budgeting reports on their website provide clues as to which billion-dollar programs are an administration priority.

Follow the numbers, take into account where the companies operate, and how a rise in bad debt or a fall in consumption could affect them.

To help in deciding where and when to invest, make sure to use Seasonality Screener. By signing up for free to https://app.seasonax.com/signup, you will be able to identify the best entry and exit points for more than 25.000+ instruments, including stocks, (crypto)currencies, commodities, and indexes.

Co-Founder and Managing Partner of Seasonax