The Golden Age Has Just Begun

Around this time of the year, we ususally discuss asset classes that have problems in most years until the autumn. We thought you might for a change want to hear of an asset that will be in a seasonal uptrend over coming months. Such assets do of course exist, and one that has particularly good prospects at the moment is gold. You may well have already heard that gold prices typically exhibit strength in the second half of the year. But when exactly does gold begin to rally, and how long does its strength last?

A Closer Look at the Seasonal Trend in Gold

Take a look at the seasonal chart of gold below. Contrary to standard charts, seasonal charts illustrate the average performance of an asset price in the course of a year. In this case the prices of the past 20 years were averaged. The horizontal axis depicts the time of the year, while the vertical axis shows the average price performance.

Gold Price in USD per ounce, seasonal trend over the past 20 years 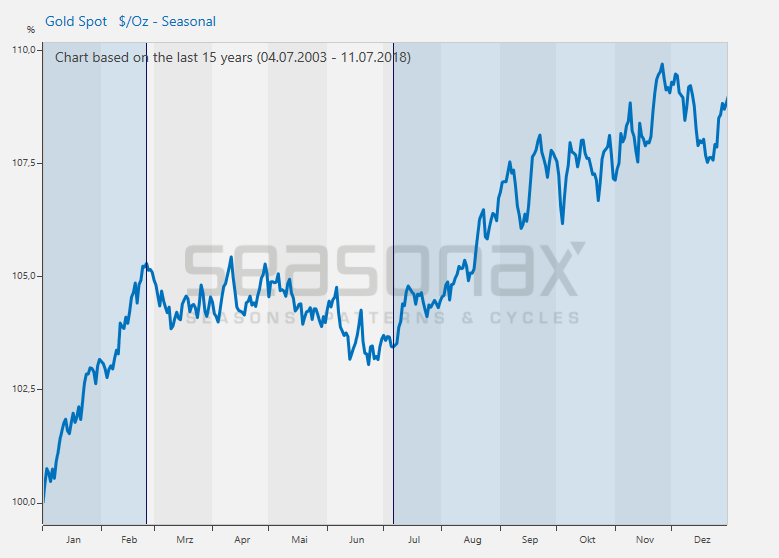 The seasonally strong period is highlighted in light blue on the chart. It begins on July 6 and ends on February 24 of the following year.
The average gain of the gold price in the seasonally positive time period amounted to 9.56 percent, or 15.39 percent annualized.
In the rest of the year the gold price on average tended to generate a loss. In short, the strong seasonal period is beginning right now!

Think About Christmas in Midsummer

Even though you are probably not thinking about Christmas in the sweltering heat of the summer months: the festive season is the reason why the seasonal rally in gold tends to begin now.
Gold is after all not only an investment asset and an industrial metal. An estimated two thirds of annual gold production is used in jewelry fabrication. Gold demand for jewelry making thus has a noticeable effect on prices.
There are numerous international festivities that begin to affect gold prices already now. These include Christmas, the Chinese New Year and the Indian wedding season in the autumn. On occasion of these festivities, gold is often given as a gift.
Since jewelry makers naturally replenish their inven-tories several months ahead of these revelries, the seasonal rally in the gold price begins already in early July.

The seasonally strong time period between July 6 and February 14 resulted in a positive return for the gold price in 16 of 20 cases. In the 16 years in which a profit was generated, the average gain in this time period amounted to 13.98 percent, while the average loss in the 4 losing years was 6.47 percent.

The bar chart below shows the gold price return in the strong seasonal phase for every year since 1998. Green bars indicate gains, red bars indicate losses.

Gold in USD, percentage return between July 6 and February 24, in every year since 1998

A particularly large gain of 43.56 percent was recorded in 2007. The largest loss was significantly smaller. It occurred in 2014 and amounted to 9.10 percent.
The upcoming strong seasonal period therefore not only tended to generate an above average number of large gains, but fewer and far less pronounced declines.

What is the Score with Silver?

You may not be aware of the fact that although the prices of gold and silver usually exhibit a strong positive correlation, the seasonal pattern of silver displays significant differences. That is due to the fact that silver has a much larger industrial demand component. Its seasonal trend therefore differs from that of gold, and incidentally, it looks actually quite similar to that of platinum and palladium.
In order to take a look at the seasonal trends of the other precious metals, call up our newly launched web application at apps.seasonax.com. You can analyze more than 12,000 assets withouth having to have a licence for Bloomberg Professional or Thomson Reuters Eikon.